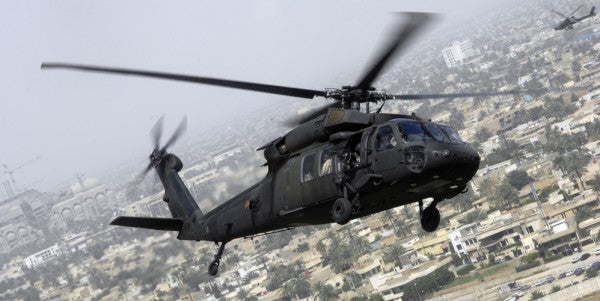 The Pentagon just took a major step towards putting unmanned helicopters in the field.

The Defense Advanced Research Projects Agency announced on Monday that the Army successfully tested a semi-autonomous “co-pilot” on a Sikorsky S-76B helicopter at Fort Eustis, Virginia, in mid-October — and Sikorsky engineers are already working to integrate the system into a UH-60 Black Hawk for testing and flight demonstration by next year.

Conducted under the Pentagon's Aircrew Labor In-Cockpit Automation System (ALIAS) program, an Army aviator tested out the Sikorsky's so-called MATRIX Technology — which governs the S-76B's autonomous functionality across various control systems — by taking the airframe through a series maneuvers ranging from confined area takeoffs and landings to low-level terrain flight.

The goal of the system is simple, as Marine Corps Future Vertical Lift (FVL) program manager Dave Braden told The War Zone: to automate specific functions in an effort to reduce pilot workload and free up mission crews to focus on more important mission-critical tasks like close air support or medical evacuations.

“The Army refers to this as Mission Adaptive Autonomy,” Ott said in a statement. “It’s there when the pilot needs the aircraft to fly itself and keep it free of obstacles, so the pilot can focus on more of the mission commander type role.”

DARPA ALIAS program chief Graham Drozeski put it a bit better: “Hovering in adverse winds is a task that consumes a human pilot’s attention, but automated flight control achieves ‘rock steady’ precision … Really, we want the pilot’s eyes and mind on the fight rather than holding an altitude.”

The Black Hawk may be the ideal practical test vehicle after the Sikorsky's S-76B test bed, if only out of necessity.

A 2017 Pentagon inspector general audit revealed that the Army “did not provide adequate funding and training for H-60 pilots on the new equipment,” suggesting a readiness shortfall for Black Hawk aviators.

While Sikorsky will clearly continue to provide new Black Hawk airframes to the Army, the incorporation of a refined ALIAS system could help make up for the training deficit for aviators — especially as the service pushes for a fully modernized and upgraded fleet of 2,135 Black Hawks by 2035.

“We’ve chosen the Black Hawk as the platform we want to demonstrate full integration of ALIAS-type capabilities – all the circuit breakers and switches and instruments in the aircraft, so that the capability ALIAS provides to a crew member is really like a co-pilot,” DARPA's Drozeski said. “It can fly routes, plan routes, execute emergency procedures, and do all that perfectly.”

This leaves one question though: Do androids dream of sky dicks?