In their race to field a more powerful automatic rifle, the Marine Corps sidestepped the normal acquisition process and approved... 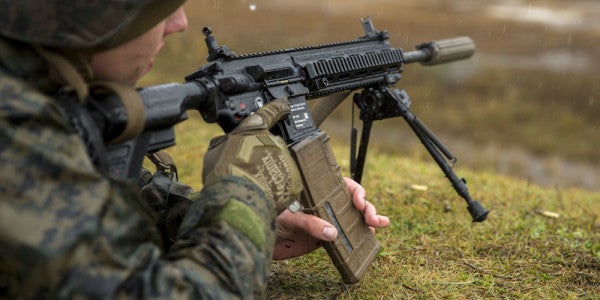 In their race to field a more powerful automatic rifle, the Marine Corps sidestepped the normal acquisition process and approved a contract to buy them at price tag five times that of the current M4 rifle. The $150 million deal, which may have involved a government employee who recently worked at the foreign arms maker that won the bid, is now under intense scrutiny from Congress — and raises questions about the Corps' aggressive focus on fielding more lethal gear into troops’ hands as quickly as possible.

During a House Armed Services Committee hearing on Marine Corps readiness on March 6, lawmakers interrogated service officials regarding the $3,000 price tag for each Heckler & Koch HK416 established in the Corps’ 50,000-rifle order announced in August 2017. While the M27 purportedly offers significant advantages in terms of efficiency, range, and lethality, that price tag is almost five times that of the M4 ($642 per rifle in 2013) currently utilized by the Corps.

Why the high price tag? The longer rifle barrel and gas piston operating system that gives the M27 an edge over the M4 likely don’t shake out to an extra two grand in engineering costs. One potential explanation is that the M27 contract was sourced solely to foreign manufacturer H&K; rather than subjected to a competition between American firearms companies. Indeed, the Corps scored a sweet M4 deal primarily because FN Herstal aggressively underbid Colt and Remington for a $77 million contract during an open competition — and contract that included a promise to manufacture the weapons at its South Carolina plant.

If the Corps intends the M27 to replace the M4 (and supplement the M249 Squad Automatic Weapon), lawmakers want to understand why won’t the service let some good, old-fashioned market competition yield a cheaper, and potentially better, choice — and support domestic manufacturing in the process.

“Do you believe that it is the best option to not compete a contract that could be as many as 50,814 rifles?” HASC Chairman Rep. Joe Wilson, Republican from South Carolina, asked Lt. Gen. Brian D. Beaudreault, deputy commandant of Plans, Policies, and Operations, during the March 6 hearing. “Do you believe the U.S. defense industrial base could support such a request?”

Beaudreault replied that an open competition for a new rifle would burn more money than it would potentially save, costing Pentagon as much as $24 million. “Do I think the industrial base could support those types of quantities? Absolutely,” he told Wilson, citing a December 2017 Government Accountability Office report on the M27. “But what we would experience by reopening the competition would be perhaps not being able to recover the additional money … and probably a two-year delay in fielding that weapon to the rest of the infantry.”

That’s partially true. The GAO report states that the Corps chose a sole-source follow-on to the Corps’ initial acquisition of some 6,500 M27s from H&K; back in 2013 because “ award to any other source would likely cause substantial cost duplication, not expected to be recovered through competition, and unacceptable delays in fulfilling the agency’s requirements.” Indeed, the report notes that a contract with competitor FN Herstal would require the service replace the thousands of H&K; M27s currently in use, resulting in an additional 6,000 units tacked on to any order place by the service.

But “starting over,” as Beaudreault put it, doesn’t appear to be the real money sink. Ironically, the GAO report doesn’t include specific prices and quantities for the individual rifles proposed during contract discussions with H&K; and FN: all of the various price points are marked as [DELETED]. But it does note that of the $27.5 million spent to procure, test, and field the H&K; M27 IAR thus far, a whopping $18 million went to the purchase of the weapons themselves. The remaining $9.5 million doesn’t square with the predicted cost of $24 million. If anything, it’s the speed of fielding, not the price, that appears of major concern to both the Corps and the GAO.

Here’s where things get complicated. When FN Herstal lodged a protest with the GAO over the sole-source contract, claiming the Marine Corps violated the Competition in Contracting Act (CICA) of 1984 that requires “full and open competition through the use of competitive procedures” for all federal government procurements; essentially, that the Marine Corps didn’t allow competition to yield the best product for the lowest price. But the GAO rejected that protest, claiming a CICA exception in which “the supplies or services required by an agency are available from only one responsible source, and no other type of supplies or services will satisfy agency requirements.”

Related: M27s And ‘Head-To-Toe’ Gear Overhaul On the Way For Marine Grunts »

Those requirements would be determined by Marine Corps Systems Command’s Program Manager for Infantry Weapons Systems, namely for individual weapons. Sources indicate the process likely involved MARSYSCOM supervisory lead engineer Sal Fanelli, who joined the command in 2008 and performed program management, analysis, and strategic advisory roles for both individual weapon and maneuver systems, according to his LinkedIn profile.

But before joining MARSYSCOM, he spent three years at none other than Heckler & Koch overseeing the XM8 program meant to replace to M16, a relationship that meant overseeing system engineering, contract strategies, program development and budgeting and, more importantly, “negotiat required contract modifications,” as he described it on LinkedIn. According to MARSYSCOM sources, Fanelli left federal service “in the fall,” between the Corps awarding of the M27 contract to H&K; in August 2017 and the GAO’s upholding of the contract terms the following December.

Fanelli was a vocal cheerleader for the program when the Corps started considering it in 2012, characterizing the M27 IAR as a “great program” in an interview with Tactical Life without disclosing his past work there. “Guns are being manufactured and shipped actually way above our schedule,” he said, emphasizing the rapid equipping that Beaudreault mentioned in his March 6 hearing. “So we’ve got guns sitting in Albany, [Georgia], waiting for our [New Equipment Training] teams to get them out there, into the hands of our Marines.”

This may just be a matter of bad optics. By all accounts of industry publications, Fanelli is a remarkable engineer and an asset to MARSYSCOM. It’s also worth noting that Fanelli also spent more time at FN than he did H&K;, working in the firearms manufacturer’s engineering department from 1982 to 2003.

Fanelli did not respond to multiple requests for comment from Task & Purpose on his involvement with the M27 program. When asked about the decision-making process behind the H&K; contract and Fanelli’s relationship with H&K;, MARSYSCOM spokesman declined to comment.

Optics matter, and nothing is above scrutiny when we’re talking about a contract worth as much as $150 million that will shape the course of Marine lethality for decades — especially when lawmakers seem more fixated on where the rifle is made and not the exorbitant price tag.