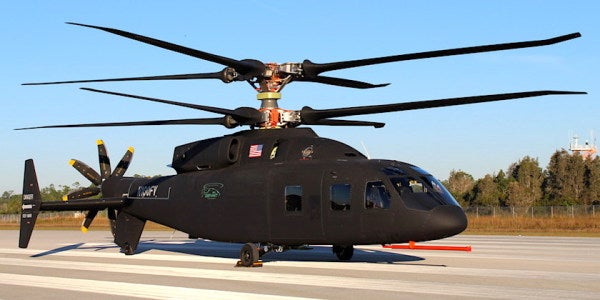 The Army is currently considering two advanced rotary-wing aircraft to replace the Black Hawk as part of the branch's Future Vertical Lift program, and after a year of firsts for Bell's tiltrotor V-280 Valor, Boeing and Sikorsky are raring to catch up in 2019 with the much-anticipated SB-1 Defiant.

On Wednesday, Sikorsky owner Lockheed Martin unveiled a first look at the SB-1 demonstrator developed for the U.S. Army's Joint Multi-Role demonstrator, the precursor to the FVL program.

The Defiant is, as Task & Purpose's Brad Howard described it, “a bigger, badder version” of Sikorsky's S-97 Raider, featuring a unique coaxial rotor system “designed to fly at twice the speed and range of today's conventional helicopters and offers advanced agility and maneuverability,” according to Lockheed. Here are some of the delightful details for the more technically-inclined, per Popular Mechanics:

First made public in 2017, the Defiant “has great potential,” according to Swami Karunamoorthy, a professor of engineering at Washington University in St. Louis with a specialty in helicopter dynamics. The strengths that the Defiant brings, Karunamoorthy says, lies in that fact that it doesn't rely on one singular style of propulsion. It's “a hybrid system,” he tells PopMech over email.

The hybrid system has a “coaxial rotor design for vertical flight” Karunamoorthy says, “and a pusher propeller system to increase the forward flight speed.” A coaxial helicopter design features two sets of helicopter rotors and has been a concept in flight design beforea flight was a reality, dating back to the 1700s. Working in tandem with a propeller system “may be twice the current speed record as it claims,” he says.

The demonstrator unveiling is a reassuring sign for Defiant after a rough patch for Sikorsky. The Raider attack copter only recently resumed testing in June of this year after a disastrous August 2017 crash. And earlier in December, the Defiant's first flight was delayed well into “early 2019” by what Flight Global characterized as “'minor' problems were discovered within the aircraft’s testbed.”

“Sometimes its instrumentation that was installed get the measurements we were hoping to get, or the software wasn’t reading properly,” Boeing Future Vertical Lift business development director Randy Rotte told Flight Global. “We have some pieces… that required some mechanical repair.”

In the meantime, chief rival Bell has been flaunting the V-280 Valor for just over a year, hitting speeds up to 190 knots with its rotors smoothly transitioning between its hover and cruise configurations as recently as April 2018 — progress that's bound to be making executives at Sikorsky nervous.