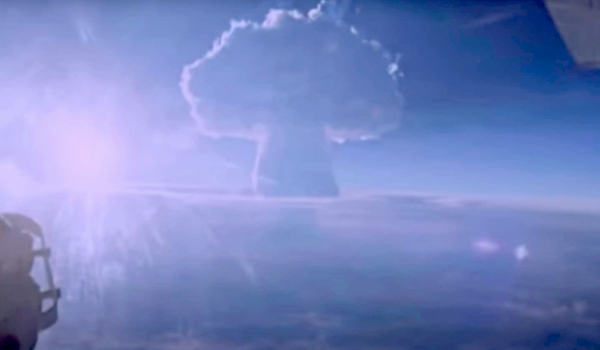 A Russian state corporation has released previously-classified footage documenting the development and detonation of the legendary 'Tsar Bomba' hydrogen bomb in celebration of 75 years of Russia's nuclear industry.

The footage, which comes during a 40-minute Soviet-style propaganda film, was released on the YouTube channel of the Rosatom State Atomic Energy Corporation, the state-run Russian nuclear energy concern, on Aug. 20.

The film details the long march of the Tsar Bomba — the informal name given to the RDS-220 hydrogen bomb by Western observers of the Soviet Union — from its transport by steam train to Olenya Air Base in northwest Russia to its final detonation above Novaya Zemlya on Oct. 30, 1961.

More importantly, it provides never-before-seen shots of the actual Tsar Bomba explosion, which had an estimated yield of around 50 megatons, or 50 million tons of TNT, in exquisite detail compared to previously-released footage of the detonation.

According to the video, the Tu-95V was 28 miles away from the release point, and the detonation produced a fireball visible 621 miles away, despite cloudy conditions. “The explosion was accompanied by a bright flash of unusual strength,” the narrator explains. Within seconds, a column of dust had risen to a height of around 6 miles.

The footage then returns to the aircraft, at a distance of 155 miles from the detonation and we see the huge fireball, rising slowly and expanding to reach a maximum of 12 miles across. Forty seconds after the detonation, the fireball has reached a height of approximately 19 miles, after which a mushroom cloud begins to form, reaching a maximum height of 37-40 miles and a diameter of 56 miles.

You can watch the full documentary below, and read more at The War Zone here.