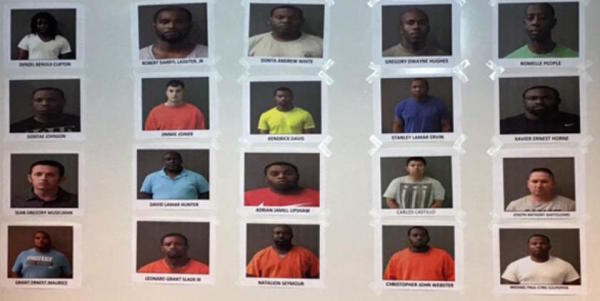 Thirteen Fort Hood soldiers face charges after being arrested this week in a prostitution sting targeting two hotels in Salado and Killeen, Texas.

“Most likely their military careers will be affected,” Bell County Sheriff Eddy Lange said Tuesday at a news conference.

The 16-hour sting, conducted by the Bell County Sheriff’s Department, resulted in the arrests of 20 men who responded to online ads offering sexual service in exchange for money. The conversations were then continued over text message through which locations and times were arranged and payments negotiated, based on what the men wanted. According to the sheriff’s office, the rates ranged from $60 to $200.

“Sheriff deputies and investigators stay and waited for the individuals to make contact and then agree to meet in person to pay for sex and ladies and gentlemen it did not take long,” Lange said. “Once an ad was placed, I think the shortest time was about 20 minutes before they had the first contact so again this is a very viable institution here in Bell County that we intend on trying to put a dent in.”

“Allegations such as these are taken seriously as they run counter to Army values,” Tom Rheinlander, director of Fort Hood Public Affairs, said in a statement on Tuesday. “As always, we are supportive of local authorities and will cooperate fully. Fort Hood will refrain from commenting further given that this is an ongoing investigation.”

All 20 men are now being charged with solicitation of prostitution and two may face felony charges for specifically responding to ads for prostitutes under the age of 18. One man had his wife and mother in the car waiting in the hotel parking lot, according to the sheriff’s department, although it is unclear if he is a soldier or a civilian.

The names of 12 soldiers involved in the sting were released by the sheriff’s office and are listed below: