After years of speculation surrounding the fate of the A-10 Thunderbolt II “Warthog” — and amid compounding budget pressures —... 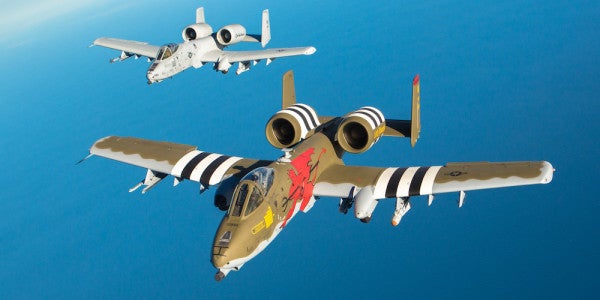 After years of speculation surrounding the fate of the A-10 Thunderbolt II “Warthog” — and amid compounding budget pressures — the Air Force’s beloved light attack aircraft just picked up a major boost from current Secretary of the Air Force Heather Wilson.

Testifying before the Senate Armed Services Committee on Dec. 11, the former Air Force officer reassured lawmakers that a multi-million-dollar A-10 wing production program to upgrade the wings on half the service’s A-10s, far from being a budget boondoggle, would keep the aircraft dominant against all manner of baddies— and Wilson added, with a smirk, “I happen to be a fan of the A-10.”

The National Defense Authorization Act approved by the House and Senate before Thanksgiving will “add money to the Air Force budget to retool and open a line for wings,” Wilson told the assembled lawmakers in joint testimony with chief Pentagon weapons buyer Ellen Lord and newly-appointed Army Secretary Mark Esper.

“It wasn’t in our budget, and the Senate Appropriations Committee is working on that now,” she said of the wing upgrade. “If that comes through, we will execute that and get that line started back up so that we can the first four or five sets of wings.”

The budget line item represents a victory for an A-10 fleet that's perennially on the congressional chopping block. Air Force officials had ostensibly abandoned the idea of retiring the Warthog in recent years — in October 2016, Air Force Materiel Command Gen. Ellen Pawlikowski reiterated that the Pentagon plans on sustaining its fleet “indefinitely” — but funding upgrades for the branch’s nine squadrons is the clearest evidence yet that the venerable close-air support platform will live on.

Related: This Is The Best Description of the A-10 Warthog We’ve Ever Heard »

The A-10 has played an essential role in the post-9/11 U.S. military, from providing close air support during the invasions of Afghanistan and Iraq to pounding ISIS strongholds with bunker- busters to joining hundreds of supersonic fighter jets in South Korea as a show of force to North Korean dictator Kim Jong-Un. But Wilson acknowledged that even as the Warthog fleet keeps flying, the Air Force will likely continue to pursue additional light attack aircraft to augment the branch’s capabilities.

“We are always managing … How do we move to new platforms at the same time we try to maintain capability and cover missions with existing fantastic platforms?” Wilson told lawmakers.