Everyone feels the need for speed. Not everyone acts on it 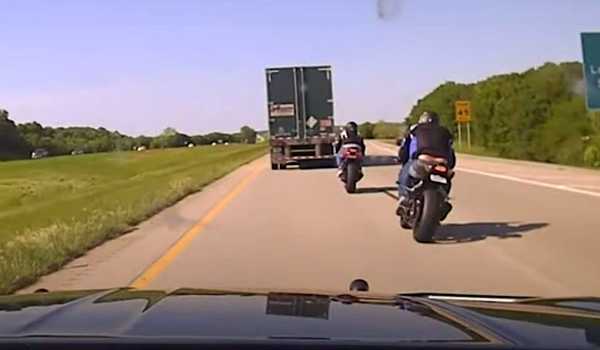 An airman assigned to Tinker Air Force Base is in a world of trouble after leading Oklahoma police on a high-speed highway motorcycle chase, Air Force Times reports.

Senior Airman Michael Alexander Workman, a 24-year-old comm systems operator assigned to the 965th Airborne Air Control Squadron, was arrested in April along with two other motorcyclists after the pursuit, which began after a member of the Oklahoma Highway Patrol spotted the trio speeding.

According to the Oklahoma Highway Patrol, Workman hit speeds in excess of 180 miles per hour while weaving in and out of traffic. The incident was recorded on the patrolman's dashboard camera and obtained by Air Force Times:

Here's how the chase went down, according to the Air Force Times report:

One motorcyclist sped up, made an unsafe lane change, and then began driving on the shoulder, but did not take part in the chase that ensued. Workman and the third motorcyclist accelerated to 120 miles per hour, before crossing into neighboring Carter County. Trooper [Walter] Jack again activated his radar and saw that Workman’s red Honda motorcycle had hit 153 miles per hour.

Jack radioed dispatch about the high-speed chase and kept pursuing the two motorcyclists, watching them swerve from one lane to another and dodge to avoid hitting a slower vehicle.

After Jack had pursued them for about eight miles, the arrest report said, he again hit the radar and saw Workman had reached 183 miles per hour.

“There was approximately half a mile of separation from the lead (black) motorcycle and the second (red) motorcycle,” the report read. “Jack could observe that they were both passing slower vehicles on the inside lane and an incredibly high rate of speed.”

Traffic started to build up, forcing the two motorcycles to slow down. Jack pulled up beside Workman’s motorcycle and boxed him in against a pickup truck, which had pulled to the shoulder. He then pulled in front of the motorcycle and arrested Workman, who started to apologize for not stopping.

The dashcam video of the arrest features a positively ripshit trooper berating Workman for his dangerous driving.

“You almost killed people out here!,” the trooper can be heard shouting. “You would have just got a ticket! Then you almost kill yourself!”

In the footage, Workman appears visibly upset when asked about the other two motorcyclists.

“I can’t lie, I’m in the military,” Workman can be heard saying. “I know both of them. I’m not gonna fucking lose my job because of them. I didn’t even want to fucking ride that fast.”

According to Air Force Times, Workman was charged with endangering others while attempting to elude a police officer. The Air Force has taken over the case against Workman from Oklahoma as of May 7.

Maybe he'll think twice the next time he feels the need for speed.