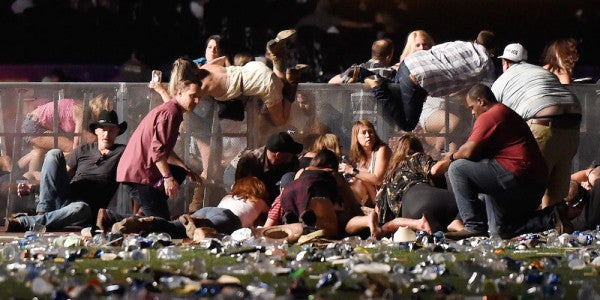 Just after 11:30 pm on Oct. 1, Air Force Maj. Charles Chesnut awoke to an alarming cryptic alert from Air Combat Command’s AtHoc Emergency Mass Notification System: Avoid downtown Las Vegas. An hour and a half earlier, at 10:08 pm 64-year-old Stephen Paddock had opened fire from his room on the 32nd floor of the Mandalay Bay casino and resort on a crowd of 22,000 revelers gathered below for a music festival.

“I was asleep in my bed, just like every Sunday before that,” Chesnut, a general surgeon with the 99th Medical Group out of Nellis Air Force Base in Nevada, said in an Oct. 3 interview. But that didn’t stop him from springing into action. “I saw the catastrophic events that were unfolding, and I said, ‘This is what we train for … they’re going to need some help.’”

Chesnut was one of several Air Force surgeons who rushed to the level-one trauma center University Medical Center of Southern Nevada in the aftermath of the Las Vegas shooting, where civilian doctors and medical personnel were struggling with the sudden deluge of gunshot victims — many of whom suffered wounds rarely seen outside of far-flung war zones.

“This was not a normal pattern of injuries,” UMC trauma surgery chief Dr. Douglas Fraser told the Washington Post on Oct. 3. The decision to call in military personnel was only logical, he added: “They are used to seeing those things.”

The shooter killed 58 people and injured 489 before ending his own life with a self-inflicted gunshot wound, making the Las Vegas massacre the worst mass shooting in modern U.S. history. Law enforcement officials say he used bump stock devices to simulate full-auto fire from his arsenal of AR-15-style, semi-automatic rifles for the attack, an event he reportedly planned for years. His motive is still known.

“That event was simulated: 100 patients, mass casualty, coming in to the 99th Medical Group, which eerily was almost the exact same number of patients we saw downtown at the only free-standing level-one trauma center in Nevada,” he said. “That training we had … helped us immensely that Sunday night.”

During the course of his efforts, Chesnut estimates that doctors saw more than 100 patients suffering from either gunshot wounds or contusions sustained after Paddock’s opening salvo sent the crowd of concertgoers into a panic. In shock, some victims didn’t even realize they’d been shot.

Chesnut himself told the Air Force he saw about 30 patients, “ranging from surgical procedures to end-of-life care to supervising our residents in training to getting glasses of water and holding patients' hands and helping them charge their cellphones.”

“Everybody worked together down there,” he said. “Nurses medics, surgeons, both Air Force and civilians, internal medicine doctors, hospitalists, anesthesiologists, critical care doctors … worked to take care of these patients, to do some good in the face of evil.”

But while UMC’s Fraser said that military surgeons are used to dealing with the “quite large wounds” inflicted by Paddock’s arsenal of high-powered rifles, Chesnut begged to differ.

“I never thought that I would see this type of mass-casualty stateside,” he said. “This is the kind of thing that happens at Bagram or in Iraq or Syria, not Las Vegas, Nevada.”