“I don’t regret going over there, fighting and getting shot down ... That’s what I took an oath to do.” 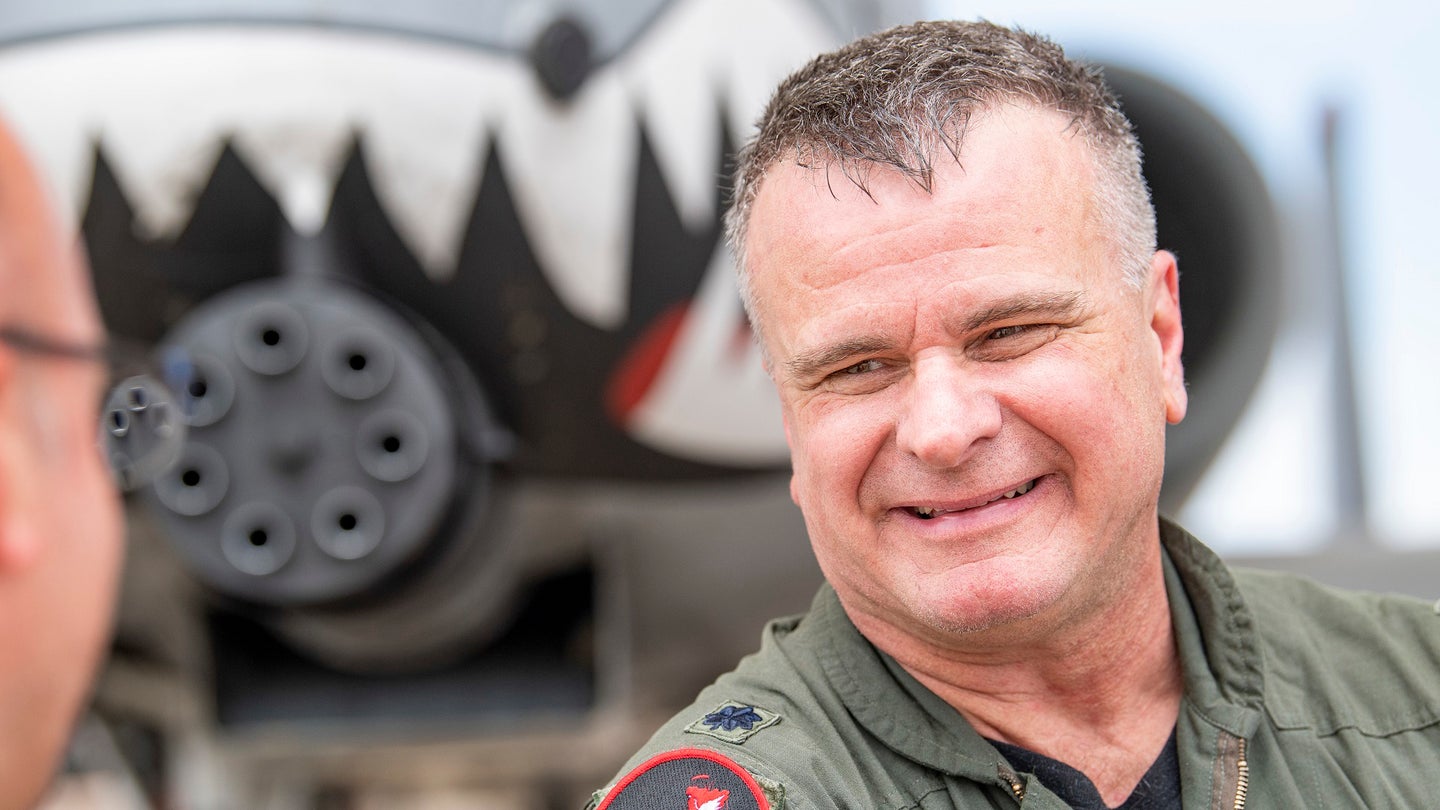 Few people have earned their retirement more than Air Force Lt. Col. Rob Sweet, an A-10 attack plane pilot with the 476th Fighter Group who flew his final flight at Moody Air Force Base, Georgia, on Saturday. Over the course of his 33-year flying career, Sweet destroyed Iraqi tanks in Operation Desert Storm, survived 19 days as a prisoner of war after being shot down outside Basra, then came back to mentor countless young pilots as he rose through the ranks.

“You’ve had an outstanding career that I know you, your family, friends and fellow Airmen are proud of,” Gen. Charles Q. Brown, the chief of staff of the Air Force, said of Sweet in a recent press release. “With your retirement it will be the first time in the history of our Air Force that we will not have a former POW serving. In closing, thank you for all you’ve done.”

It may come as a surprise to some that there were any prisoners of war still serving in the military. But Sweet still remembers his own capture clearly.

“I thought to myself ‘this is it — I’m a dead man,’” the pilot recalled in the news release. On Feb. 15, 1991, a month after the start of the Gulf War, Sweet was flying on a mission to hunt down Iraqi Republican Guard tanks about 80 miles north of the border with Kuwait. It was the 24-year-old lieutenant’s 30th mission of the war, and he told People magazine that he was “a little keyed up” because he and his flight lead, Capt. Stephen R. Phillis, both of the 353rd Tactical Fighter Squadron, would be far from help if anything went wrong.

His instincts were right: when Phillis and Sweet arrived at the target area, they were met by heavy anti-aircraft fire. The two pilots were ordered to turn around and leave, but on their way back they found a target they could not pass up.

Related: The most feared military training

“We left and found a pristine array of tanks that had not been hit, which shocked us because by that point everything had been bombed for the past 30 days,” Sweet said.

The airmen attacked, and Sweet had already dropped his bombs when a surface-to-air missile (SAM) raced past him. He saw where the missile was fired from and was just about to attack the launch site when he felt a bump from behind.

“I looked back and saw that the rear end of my right wing was all in flames,” Sweet said. “‘Oh, man, I’m hit!’ I yelled, and I started south, trying to make it to the border.”

But it was too late. The SAM had taken out Sweet’s steering, and all his attempts to recover the aircraft failed. Left with no other options, the pilot punched out using the A-10’s ejection seat. It was quiet after Sweet’s parachute deployed and he floated down to earth, but he realized with horror that he was going to land close to the tanks he had been trying to kill just a few minutes earlier.

“That’s when I said. ‘Oh, man, this is not looking good,’” Sweet recalled. “Before I hit the ground about 200 guys came out of these little holes. I didn’t even have a chance to get my radio out of my survival vest and talk to anybody.”

Sweet tore his Achilles tendon upon landing, then the real misery began. The airman received seven rifle butts to the head from Iraqi soldiers before a few officers dragged him away. Later that night “they threw me in a car and drove like maniacs” to Baghdad, where he arrived on Feb. 17.

Over the next 17 days, Sweet endured beatings, starvation, diseases, and just plain boredom sitting on the stone floor of his 8 by 15 foot prison cell.

“I did lots of thinking,” Sweet said. “One time I thought about all the different flavors of ice cream — I had a craving for a vanilla cone dipped in chocolate …  I also thought about getting a master’s degree in history and doing something good, like volunteer work for the Red Cross. But what bothered me the most was thinking about my poor mother … I knew she would cry a lot, and I prayed for her to have strength.”

Still, Sweet credited the military’s Survival, Evasion, Resistance and Escape school for preparing him for the ordeal.

“There were very few surprises in the jailhouse,” he said. “I knew what to expect.”

Some of the prisoners of war from earlier conflicts, such as the Vietnam War, waited for years before their release. Thankfully, on March 6, Sweet was released along with 15 other American prisoners, 19 days later and 13 pounds lighter than when he was captured. In total, 23 Americans were captured during the Gulf War, many of whom were beaten and tortured, according to the National Park Service. Fortunately, all 23 were returned to the U.S.

“We took off and flew to Riyadh, Saudi Arabia, where the sun was shining,” Sweet recalled. “It was like going from hell to heaven. Then it hit me and I thought, ‘Boy, that was really a nasty place.’ On the ground, I saluted General Schwarzkopf, shook his hand and gave him a big old hug.”

Tragically, Sweet’s old flight lead, Capt. Stephen R. Phillis was killed while trying to draw fire and coordinate a search and rescue attempt during Sweet’s capture. Phillis was posthumously awarded the Silver Star for his actions, though some, including Sweet, are calling for that to be upgraded to the Medal of Honor, according to Air Force Magazine. Phillis’ death was one of many scars Sweet had to cope with after returning home.

“I was not without psychological problems,” he said. “I had survivor’s guilt, and it took me a long time to get over that.”

But through those struggles, the airman said he learned how to take life as it comes.

“The experience changed me. I take life a lot easier than I used to, smell the flowers, keep from getting upset over little things — I’m more patient,” he told People just a few months after returning home. “Right now, I just want to relax and run around with my friends from high school.

“I don’t regret going over there, fighting and getting shot down,” Sweet added. “That’s what I took an oath to do.”

That mindset helped when it came to mentoring younger pilots, something he went on to do frequently over the next few decades.

“Bloom where you’re planted,” he said. “You’re going to have assignments you don’t like, but make the most of them and move on.”