Whatever happened to that guy who allegedly stole an APC and went on an epic joy ride through Virginia, with police chasing him as he apparently live-tweeted the incident? 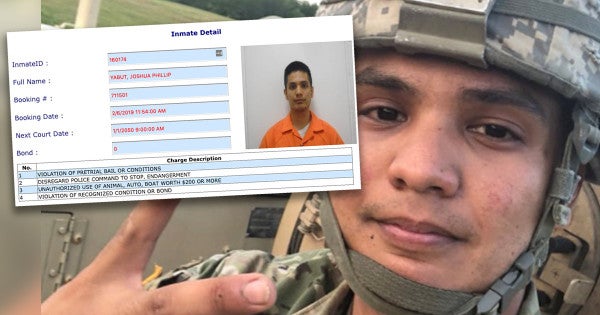 Whatever happened to that guy who allegedly stole an APC and went on an epic joy ride through Virginia, with police chasing him as he apparently live-tweeted the incident?

That’s a very good question! And I have an update for you, which includes more weird/hilarious tweets and new accusations that he violated the terms of his bond and traveled to Iraq.

Joshua Phillip Yabut, 30, of Virginia Beach, was out on bond awaiting trial in both Richmond and Nottoway on charges associated with the 65-mile police pursuit when he apparently traveled to Iraq earlier this year, according to a report prepared by the Virginia Fusion Center, a partnership between Virginia State Police and the state Department of Emergency Management aimed at terrorism and criminal activity.

“He had no coherent reason for the travel,” said the report, which is among court documents in Nottoway Circuit Court. In another report, Yabut “reported traveling to Iraq to engage in photography.”

Let’s back up for a moment. To refresh your memory, in June 2018, Yabut, a first lieutenant with the Virginia National Guard, was arrested by Virginia State Police, who said they chased him for 65 miles while he was behind the wheel of an M577 Armored Personnel Carrier, which he drove from Fort Pickett to near Richmond City Hall.

Before all of this, Yabut was tweeting some clues to his plan, and then later, a selfie to commemorate his legendary status (note: This Twitter account is unconfirmed, but it certainly looks to be Yabut’s, given that he tweeted his full name, rank, DoD ID#, and other personal information in the weeks prior).

He was later arrested and charged with unauthorized use of a motor vehicle. Besides appearing in court, he was also involuntarily committed to Virginia’s Central State Hospital.

After Yabut was released on bond, he went back to tweeting his random musings, talked of things he was coding, shared photos of wood-working projects, and dropped his private medical records, which asserted that he was not under the influence of drugs during the APC incident (this charge was later dropped).

He also shared records purportedly showing a diagnosis of post-traumatic stress disorder, insomnia, bipolar disorder, and an unspecified anxiety disorder. And according to court records, on Jan. 22 Yabut boarded a military flight from Naval Air Station Norfolk — with plenty of stops in between — that eventually led him to Erbil, Iraq. He returned two days later, according to The Richmond-Times Dispatch.

Meanwhile, over on his Twitter account, Yabut posted on Jan. 29 that he “liberated Kurdistan” along with photos taken at Erbil International Airport.

The Virginia Fusion Center, which prepared the report about Yabut’s bond violation, also mentioned in court documents that he was researching bomb-making and “displays information on two issues” of al Qaeda magazines, but if you look at the breadth of his Twitter feed, it’s pretty random. I mean, seriously, the guy sometimes retweets the official U.S. Army account, then pivots to a quiz from 538, before saying shit like “3am scared walking home alone extended asmr video” or “can’t believe tom clancy is dead.”

For what it’s worth, Yabut also changed his name on Twitter from Joshua [BCH] to “Boiling” in Persian, which could be perhaps the least bizarre thing in this case. But hey, that’s just me.

Task & Purpose reached out to the Virginia National Guard for comment, but we have not yet received a response. However, a Guard spokesman told the Times-Dispatch that Yabut’s superiors took his military identification card; his lawyer said his passport was given to a judge.

Yabut is currently being held in the Richmond City Justice Center, where he was booked on Feb. 6.

SEE ALSO: The Soldier Who Allegedly Took A Joyride In An APC Live-Tweeted The Entire Incident