The cemetery will be closed to the general public through Memorial Day weekend, with restricted access for family pass holders. 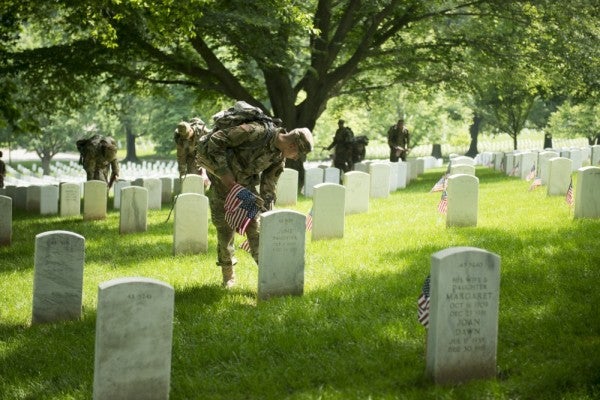 The family members of those interred at the cemetery will be limited to gravesite visitations and touring of other sites will not be allowed, according to a news release.

“We are expecting several thousand family pass holders to visit their loved ones' graves this Memorial Day weekend,” Charles “Ray” Alexander, Jr., the cemetery's superintendent, said in a statement.

However, allowing public access could be unsafe during the ongoing threat from the novel coronavirus.

The only gate open to family pass holders over the holiday weekend will be the Memorial Avenue gate at the main entrance of the cemetery, officials said. Family members will need to show a valid family pass and have a face mask in their possession to gain entry.

Families members “must wear their face coverings in restrooms and at all other times while in the cemetery where they are unable to maintain a six -foot social distance,” according to the announcement.

Throughout the Memorial Day weekend, a multi-media virtual visitation will be distributed on either the cemetery's website or on social media.

It was not immediately clear whether the traditional wreath laying at the Tomb of the Unknown Soldier and an address by the president or a designate in the cemetery's amphitheater on Memorial Day, May 25, would also be virtual.

On Friday, the cemetery marked the 100th anniversary of its historic amphitheater with a virtual ceremony and other events. Arlington has been closed to the public since March 13, with access limited to family pass holders.

The 142 national cemeteries run by the Department of Veterans Affairs, with more than 4.7 million veterans gravesites, have remained open to the public during the pandemic and will remain open through the Memorial Day weekend. Burial services, however, have been drastically curtailed.

Wreath-laying ceremonies and the playing of “Taps” through the Memorial Day weekend will be closed to avoid public gatherings at the veteran cemeteries, according to the VA.

24 Navy Ships Went to the Shipyard for Repairs. Only 3 Made It Back to Sea on Time