The Army’s standard-issue rifle replacement program may have died before it even really started, but the branch’s new and improved... 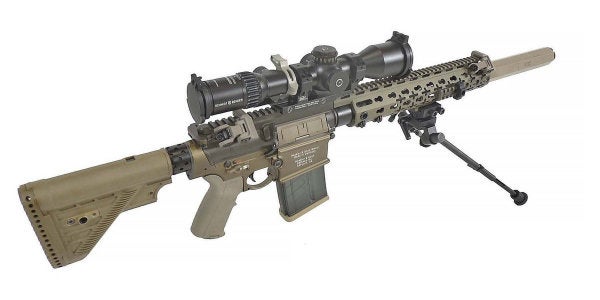 On Sept. 20, the Army announced that it had canceled its brand new Interim Combat Service Rifle (ICSR) program, just over a month after its first solicitation for a temporary 7.62mm-chambered service rifle. The program died because of shortfalls and uncertainties following a continuing budget resolution passed by Congress, sparking worries that the branch’s M110A1 Compact Semi-Automatic Sniper System (CSASS) program — established in 2012 to replace the M110 sniper rifle with a maximum order of 3,643 lighter 7.62mm rifles that don’t sacrifice reliability or accuracy — might die along with it.

But Congress, fixated on jousting over the federal budget, didn’t seem to get Milley’s message. The cancellation of the ICSR — which was explicitly established as a temporary replacement for that M4 that could chamber a 7.62mm round — was a direct result of the three-month, continuing resolution passed by Congress on Sept. 14, which Secretary of Defense James Mattis warned lawmakers would kill the ICSR effort along with 17 other Army start-up programs, according to a Sept. 8 letter to Sen. John McCain obtained by Defense News. And while the ICSR program was the only 7.62mm project in jeopardy explicitly named by Mattis, he emphasized that “funding limitations for all research and development in services assessing the relative priorities of their programs.”