For the first time in three years, Army recruits will have to pass a marksmanship test during basic training using... 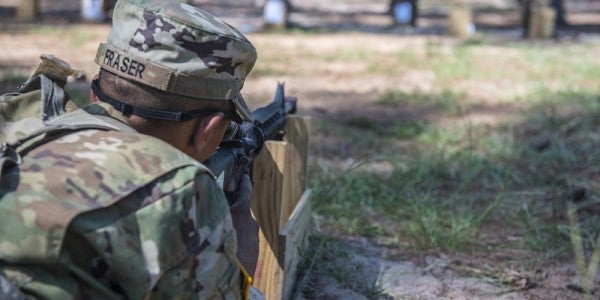 For the first time in three years, Army recruits will have to pass a marksmanship test during basic training using only the backup iron sights for the M16 rifles and M4 carbines, officials said.

Army recruits used only iron sights during basic training until 2015, when Army switched to the close combat optic which allows soldiers to to aim with the benefit of a built-in red dot centered on a target when they look through the scope, officials told Task & Purpose.

“In 2015, we stopped doing the rifle marksmanship test itself for the iron sights and only did it for the CCO – they did all training up until then but they only tested on the CCO,” said Marken, director of quality assurance for the brigade. “Now, they will test on both the CCO and the iron sights.”

Although the Army offers a range of optics for rifles and carbines, including thermal sights,soldiers will have to rely on their iron sites if their battery dies or if the enemy can jam the close combat optic in an increasingly crowded electronic warfare environment, said Col. Fernando Guadalupe Jr., commander of the Leader Training Brigade.

In Iraq and Afghanistan, soldiers often found themselves in close quarters fighters, which drove the Army to make training on the close combat optic a priority, Guadalupe said. Now the Army is training soldiers to fight in “technologically degraded environment” where enemies can launch electronic warfare attacks, rendering high-tech gear useless, he said.

“We want to make sure that the soldier can quickly shift back to the mechanism that is a permanent part of that weapons system, the backup iron sights,” Guadalupe said.

The Army does not currently have any data to suggest that any soldiers have been unable to hit their targets in combat because their close combat optics failed and they were not trained enough on how to use their iron sights, he said.

Military.com first reported on May 18 that the Army was increasing training on iron sights as part of a wider effort to make soldiers better at marksmanship during basic training.

Starting in October, all Army recruits will fire 600 rounds during 92 hours on the range, compared with the 500 rounds that recruits currently fire during 83 hours of marksmanship instruction, said Thriso Hamilton, the brigade’s specialist for basic training.

The Army has also added a “battle, march, and shoot” drill at the end of The Forge, the 81-hour culminating event of basic training, Hamilton said. Soldiers march four miles without a rest at a pace of 17-to-18-minutes-per-mile before heading to the range, doing 25 pushups, and then firing off 40 rounds.

Each platoon is timed and soldiers earn or are deducted points based on their march times, how accurately they shoot, and if they have the correct equipment that is supposed to be in their rucksacks, he said.

Army recruits at Fort Jackson, South Carolina, have already gone through the “battle, march, and shoot,” and all Army bases that host basic training will include the event starting by October, Guadalupe said. Having the event at the end of the Forge will test soldier’s ability shoot accurately while weakened physically from relentless combat training over the past four days. It also instills in soldiers the need to ensure their weapons are in working order.

“That event at the end also makes it a key, essential part of training: ‘I’ve got to take care of my weapon and make sure I don’t damage it or I don’t change the sights on it, which I grouped and zeroed with, because at the end of it I have to travel certain distances and engage targets – and do it effectively – for me to complete The Forge,’” Guadalupe said.