The Army is moving forward with changes to basic training slated to begin in October, despite the recent arrest of … Continued 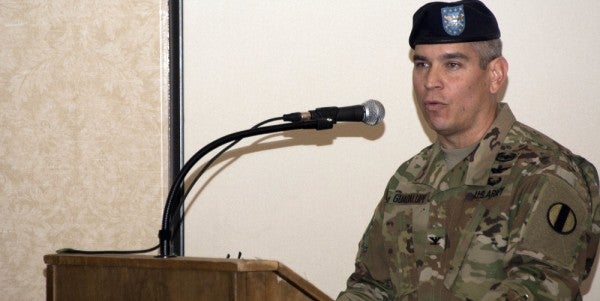 The Army is moving forward with changes to basic training slated to begin in October, despite the recent arrest of the commander in charge of implementing the new program of instruction.

Col. Fernando Guadalupe Jr. has been suspended as commander of the Leader Training Brigade after being charged with solicitation as part of a prostitution sting, The State newspaper in Columbia, South Carolina first reported.

Col. Fernando Guadalupe was charged on July 10 with solicitation of prostitution.

Guadalupe Jr. allegedly agreed to pay $100 to an undercover officer posing as a prostitute and was arrested on July 10 when he showed up at the agreed upon time and place, according to the Richland County Sheriff’s Department in South Carolina.

The colonel faces a misdemeanor charge of solicitation of prostitution and is slated to appear in court on Aug. 7, sheriff’s department spokeswoman Capt. Maria Yturria told Task & Purpose on Monday. Attempts to reach Guadalupe Jr. for comment were unsuccessful.

Based at Fort Jackson, South Carolina, Guadalupe Jr. had been responsible for implementing new criteria for basic training that include a greater emphasis on marksmanship. Starting in October, all Army recruits will fire 100 extra rounds on the rifle range, test on their iron sights, and pass a “battle, march, and shoot” drill as part of The Forge, basic training’s 81-hour culminating event.

Those changes are already underway and will not be slowed by Guadalupe Jr.’s suspension, said Lt. Col. Jeffrey Pray, a spokesman for the U.S. Army Center for Initial Military Training. The new program of instruction is already being implemented at Fort Jackson and elsewhere.

“Because the ball has already started rolling on that, there’s not much that the LBT [Leader Training Brigade] commander would be involved with at this point, because everything has already been put in place,” Pray told T&P.; “It’s kind of past the point where the commander would have a significant impact on making those changes to basic training.”

The Army has been preparing to update basic training for months, so Guadalupe Jr.’s arrest will not delay the Oct. 1 start of the enhanced marksmanship instruction, Pray said.

“Even though he is a key figure, it’s not going to make a significant impact to the implementation of that,” Pray said.