Ever since he ambushed Secretary of Defense James Mattis at the Pentagon on a Saturday morning in July, Blackwater founder... 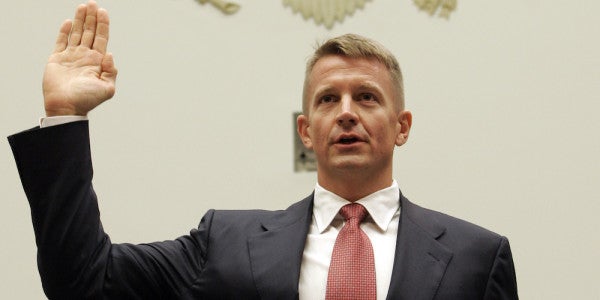 This prospect should, as Task & Purpose’s Adam Weinstein wrote, scare the living bejesus out of you. On Dec. 7, BuzzFeed News published the slide presentation for Prince’s Afghan “exit strategy” in the form of a slide presentation that the Blackwater founder, with Stephen Feinberg of money-grubbing, sex trafficking, Iraqi-killing defense contractor DynCorp, blindsided Mattis with at the Pentagon over the summer. The focus of the plan? Taking the commander-in-chief’s pipe dream of strip-mining Iraq for resources and apply it to America’s longest war, without any real, substantive change in tactics and strategy — other than, you know, shooting everything in sight.

The slides lay out “a model of an affordable way for the United States to stabilize a failed state where we are presently wasting American youth and tens of billions of dollars annually,” a Prince spokesperson told BuzzFeed News in a statement on Dec. 7. (When stopped by the story’s author for comment, Price had a different response: “You’re a fucking hack.”)

Never mind that the Marine Corps’ return to Helmand this year, for the first time since the end of NATO combat operations in 2014, offers “a blueprint for President Donald Trump’s troop surge” and subsequent training and advising missions designed to strengthen the ANDSF, according to the Los Angeles Times. Never mind that U.S.-led personnel in Helmand recently knocked off the leader of the Taliban’s infamous “Red Unit” commandos — a major blow to the terror group, as well as the opium trade that helps finance militants across the country.

The publication of Prince’s Afghan war plan comes as the Blackwater founder is even further ingratiating himself to the Trump administration’s national security apparatus. White House and CIA officials are reportedlymeeting with private contractors to consider a slate of programs for the United States to engage in “privatized covert actions, intelligence gathering, and propaganda missions” that include rendition, according to BuzzFeed News. The Intercept notes that those proposals were developed by Prince and CIA veteran-turned-contractor John Maguire, “with assistance” from Oliver North of Iran-Contra fame. CIA director Mike Pompeo, who’s currently under consideration to replace the increasingly unruly Rex Tillerson as Secretary of State, has been bullish on the idea of a private covert army. That detachment of private troops would be “a direct-action arm, totally off the books,” one source told The Intercept. “The whole point is this is supposed to report to the president and Pompeo directly.”