Karma is a real motherfucker. So are wild boars. On April 23, a menacing squad of ISIS fanboys got acquainted... 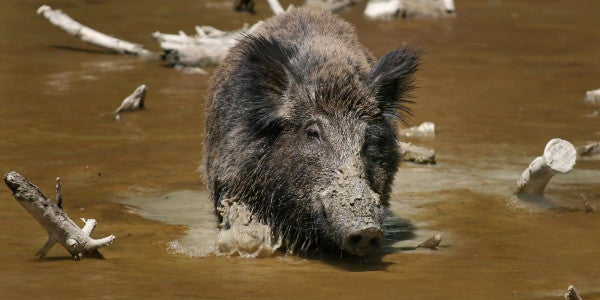 Karma is a real motherfucker. So are wild boars. On April 23, a menacing squad of ISIS fanboys got acquainted with both, according to The Times of London:

A herd of wild boars has mauled three Islamic State militants to death and injured five others in Iraq while the extremists were setting up an ambush, Iraqi locals have claimed.

The militants had taken cover in a bed of reeds near fields in the Hamrin mountains, about 55 miles southwest of Kirkuk, when they were attacked by the animals on Sunday, a local sheikh told The Times.

The group were planning a surprise attack on local tribesmen who had formed anti-Isis brigades and fled to the mountains when the militants seized the nearby town of Hawija in mid-2014.

“It is likely their movement disturbed a herd of wild pigs, which inhabit the area as well as the nearby cornfields. The area is dense with reeds, which are good for hiding in,” anti-ISIS leader and local tribal chief Sheikh Anwar al-Assi told The Times.

The pork-tenderized militants had recently committed 25 execution-style killings in Hawija, a nearby village known as an ISIS stronghold, al-Assi said.

Wild boars are no damn joke, as anyone who’s ever frolicked in the Florida Everglades, Georgia lowlands, or Texas hills can tell you. Get a numerous-enough herd of big-enough pigs, and the nasty snorters can turn you into a processed pork product with a quickness.

Then again, anybody who’s ever sat in on a tribal council or jockeyed a SIPR terminal in Mesopotamia knows that Iraqi sheikhs say a lot of fun things, some true, some not.

This is a single-sourced story, and it happens to accord with the karmic sensibilities of a lot of vets who’ve fought Jihadi Joe in the long war. So, you know, temper your S2 briefing slides accordingly.

But oh, brother, how I want to believe.