Boy Stands To Salute Veteran’s Funeral Procession, And Brings A Widow To Tears

The O’Keefe family, having been in the funeral-home business for 151 years, pulled out all the stops when patriarch, World... 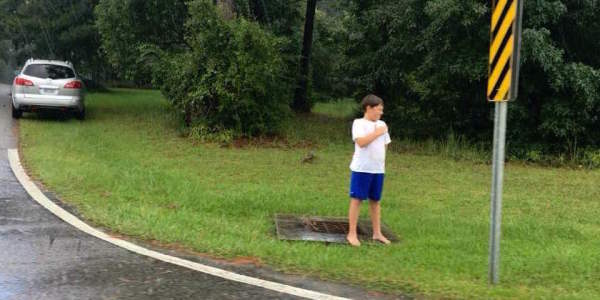 The O’Keefe family, having been in the funeral-home business for 151 years, pulled out all the stops when patriarch, World War II flying ace and community philanthropist Jerry O’Keefe was laid to rest Saturday.

There were poignant eulogies, veterans in uniform, pilots who flew the missing man formation, gospel singers and bag pipes graveside. But nothing topped a simple and spontaneous act by a little boy who knew of Mr. O’Keefe but never met him.

The family saw the little boy after the funeral procession departed Biloxi and wound onto Porter Avenue in Ocean Springs.

The boy stood barefoot on the roadside, hand over heart, in the driving rain. He held his position for the 30 minutes it took the procession to pass.

“It was very touching to see him there,” Martha O’Keefe, Jerry O’Keefe’s widow, said through tears Tuesday morning. “It was so touching to see that young man show such respect for Jerry.”

A member of the procession snapped a picture. Joe O’Keefe, the youngest of Jerry O’Keefe’s 13 children, shared the photo on Facebook, asking if anyone knew the boy. “His face was one of the most moving, inspiring and healing images of the day,” Joe O’Keefe wrote. “Young man, you blessed us all.”

Other family members and friends also posted the picture. One post had almost 600 shares by noon Tuesday and the little boy was, of course, identified.

His name is Kaiden Wade, and he is 9 years old. Kaiden is in school today at Ocean Springs Upper Elementary. He may or may not know the hearts he has touched.

On Saturday, Kaiden’s father Kevin Wade said, the two of them were visiting Kevin’s grandmother, who recently fell and broke her pelvis. She mentioned the funeral procession would be coming by and would include a horse-drawn hearse. Kaiden wanted to walk to the corner right away, but they told him it would be a couple of hours.

So he waited. He and his father walked to the corner, a couple of houses down, where the procession would pass. Kaiden met firemen waiting there with a truck and was excited to sit in it. When it started raining, Kevin’s grandmother called and told them to come back to the house. Kaiden wanted so badly to stay, his father indulged him.

“He stands not just through the whole procession, but the last police car that came through — standing still with his hand over his heart,” Kevin Wade said. “It was amazing to me.”

Kaiden’s mother, Amy Wade, said her son is like that. He has an uncomplicated mind, she said. You help your friends; you show your respect.

At his great-grandfather’s funeral, when Kaiden was 8 and in a town where he didn’t really know people, he stood by the casket during the wake, greeting every mourner. He has spent the night with his great-grandmother in Ocean Springs to help after her accident.

He tells her, “We’re not going to let you fall, Mawmaw.”

So his mom, a nurse who was working Saturday during the funeral, was not at all surprised by her son’s gesture. He wanted to pose with the new hearse when his great-grandfather died in Perry County.

But the O’Keefes have a little surprise in store for Kaiden. We won’t spoil it here.

Cecilia O’Keefe Neustrom, one of Jerry O’Keefe’s daughters, will always remember the sight of that little boy on the side of the road. She drove through the neighborhoods off Porter searching for the boy before her family found him on Facebook.

In the young man, she saw her father.

“This young fellow was the symbolism for the youth and vitality that was so present in my Dad,” she said. “You can't put your finger on what it meant. He was all by himself and he was barefoot, just standing alone in the rain.”