What Changed And What Stayed The Same: How 2014 Impacted The Veterans Community

2014 has been a tumultuous year for veterans and the military. A country where many thought the war was over... 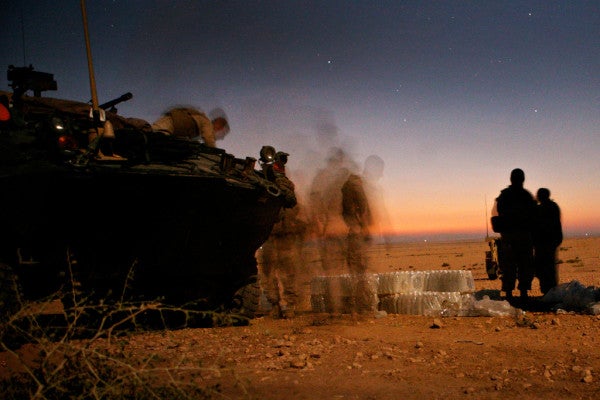 2014 has been a tumultuous year for veterans and the military. A country where many thought the war was over is back in the headlines, while another faces an uncertain end. The Department of Veterans Affairs has taken a serious black eye, and day-to-day issues such as homelessness and veterans unemployment are starting to improve. As the year comes to an end, here is a look at the issues that have affected us all.

U.S. troops head back to Iraq

There has been a lot written by veterans who saw cities and towns they had fought for years to secure suddenly collapse in the face of the twisted, medieval monsters who call themselves the Islamic State. Fallujah, Ramadi, Mosul, the list goes on. The atrocities committed by ISIS, along with sectarian violence, has sent the country spinning toward another civil war like the one thousands of U.S. service members died trying to stop.

Now U.S. troops are once again in Iraq, trying to put Humpty Dumpty back together again one more time. Though in theory they will face no direct fighting — confining themselves to a “train and advise” role — history demonstrates that mission creep has a life all its own. Over 1,300 airstrikes since Aug. 8 show that the U.S. is definitely back in the war.

If there was a single event this year that most affected the veterans population, it was the appalling revelations of duplicity and patients being waitlisted to the point of death that came out of the Department of Veterans Affairs scandal. Eric Shinseki, a highly respected general who lost part of his foot in Vietnam, resigned in the face of public indignation.

The VA has never exactly had a sterling reputation for efficiency in the military community, and though the scale of dysfunction and malfeasance should have been shocking, for many it only confirmed to the public what veterans already knew.

Former Procter & Gamble executive Robert McDonald took the helm at the VA in July with the hope that a management expert with long corporate experience can shake things up at the vast agency. With billions in new funding and a mandate for change from Congress, it can be hoped that desperately needed reform will finally be seen at an agency notorious for its bureaucracy.

It has been estimated that roughly 22 veterans a day take their own lives, a ghastly reminder of the troubles that can follow soldiers back from war. Perhaps some of the wider reforms taking place at the VA can help stem this number, even if efforts such as the Clay Hunt Suicide Prevention Act have been bogged down in a historically unproductive Congress.

Far too many face this personal nightmare, or know someone who has. It is hard to say what can be done beyond raising awareness and providing more services, because everyone faces their demons in their own way, and for many, it is too much to bear. As a nation that has sent millions to face wars in countries many of our citizens can’t even find on a map, we have to do better.

The release of Bowe Bergdahl

Army Sgt. Bowe Bergdahl’s release by the Taliban in May sparked a furor among military and political communities. The Army’s original investigation into his disappearance in June 2009 concluded that he had deliberately left his post, and there is a wide belief that soldiers from his unit died looking for him. A new investigation recently concluded and presented to Secretary of Defense Chuck Hagel and Secretary of the Army John McHugh for review.

That many are angry over trading five senior Taliban for one alleged deserter who may be the definition of a buddy fucker is only natural. Though we still don’t know the results of the Army’s latest investigation into the matter, it is clear that we couldn’t simply leave him to rot. The military’s maxim of “leave no one behind” applies to the misguided, the contemptible, and the cowards as much as it applies to those who go above and beyond the call of duty.

Bergdahl could face jail for desertion, or receive $300,000 in back pay. What is justice at this point is hard to say. Either way, we can’t forget he spent nearly five years in terrible conditions, dreading every day that the knife and the video camera would make its appearance. He has already paid a steep price.

Casualties of war at a new low

Fifty-five Americans lost their lives in Afghanistan this year, most recently Army Spc. Wyatt J. Martin and Sgt. 1st Class Ramon S. Morris, who were killed by an improvised explosive device on Dec. 14. On one hand, this is good news; this is the lowest number of deaths in combat in Afghanistan since 2004, and is significantly lower than the 499 who died in 2010.

But that is still 55 families ripped apart by a war that has dragged on for 13 years, and with the continued presence of U.S. troops in Afghanistan, even with dramatically scaled back operations, they might not be the last. With the future of Afghanistan in as much doubt as ever, are we back to asking men and women to be the last ones to die for a mistake? Maybe, maybe not, and perhaps that uncertainty is the worst cut of all.

As of this year, the primary combat mission of the U.S. military in Afghanistan has drawn to an end. From a height of over 100,000 in 2010, there will be roughly 10,800 remaining through the next year.

The war in Afghanistan has lasted over 13 years, the longest war in our nation’s history. So far, it has led to the deaths of 2,356 American military personnel alongside 1,129 others from nations ranging from Great Britain to Romania. By one account, we have spent over $640 billion directly on the war, with long-term ancillary costs like veterans’ health care and survivor benefits spinning off into the trillions.

What has all this blood, sweat, and untold treasure bought us? From the perspective of active-duty personnel, not much, according to a poll taken by the Military Times. It shows only 23% of those surveyed felt optimistic about the U.S. succeeding in Afghanistan, and what “success” is in a land that is in many ways a nation in name only has proven hard to define.

For the hundreds of thousands of military personnel who have rotated through Afghanistan since the Twin Towers fell, the real question is what we hoped to accomplish there. Jeffersonian democracy and peace in a place where the term biblical has become cliché, and constant warfare has dragged on for the bulk of two generations? As the Taliban reasserts itself, it is hard to keep that mad dream alive.

Good news for the unemployment rate

The unemployment rate for post-9/11 veterans has dropped to 5.7%, which is slightly better than the rate among the general population at 5.8%. For veterans of all generations, the rate is even lower at 4.5%. This is a marked drop from 9.2% in February this year, which may be due to the small sample size used in the surveys, but clearly the long-term picture is improving. We have a gradually improving economy and many excellent employment services to thank for this development.

The decrease in veterans homelessness

If there is a real bright spot in the picture this year, it is the continuing fall in veterans’ homelessness, which has dropped by roughly a third since 2010. There are approximately 40% fewer vets sleeping on the streets, thanks to an expansion of programs and funding initiated by the Obama administration early in his tenure. Shinseki, whatever his flaws, deserves credit for this achievement. Obama requested $1.6 billion for the programs in 2015, which focus on vouchers subsidizing housing and temporary shelter facilities, building on the program’s success. In a year blighted by scandal, this is one area we should applaud the VA for making real headway.

Those who have served since 9/11 have faced unpopular wars with uncertain goals, often deploying again and again to serve an often apathetic and indifferent public. What our legacy will be in Iraq and Afghanistan is murky at best. But we can give thanks that those who served can expect a brighter picture in the coming years with services, jobs, and other necessities. The public owes them no less, and perhaps it is finally making good on that debt.