How Congress Could Overrule Trump’s Ban On Transgender Service Members

On July 25, President Donald Trump blew up the Department of Defense’s approach to transgender military service members in three … Continued 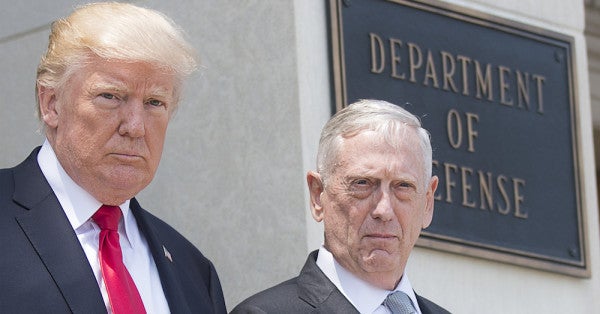 On July 25, President Donald Trump blew up the Department of Defense’s approach to transgender military service members in three simple tweets. The federal government “will not accept or allow transgender individuals to serve in any capacity” in the armed forces, the commander-in-chief wrote. “Our military must be focused on decisive and overwhelming victory and cannot be burdened with the tremendous medical costs and disruption that transgender in the military would entail.”

Naturally, many lawmakers are pissed with Trump's surprise transgender ban. “Trans soldiers have been fighting, dying for our country in our military they deserve our thanks and support, not this bigotry and hatred,” wrote California Democrat and veteran Rep. Ted Lieu. “The president just went on Twitter to attack 15,000 trans service members who are risking their lives to protect our freedom,” tweeted Rep. Mark Takano, a ranking member of the House Committee on Veteran’s Affairs. “How brave.”

Mean-spirited, short-sighted, morally repugnant and undermining to service to the US. And which generals belong to the President? https://t.co/yJxG9WbwkN

There are several problems with Trump’s proclamation, but the key question isn’t whether the president is right or wrong: It’s whether he has the constitutional authority to unilaterally change the face of the American military.

Every good mudfoot knows that the president is vested with the authority of commander-in-chief of the U.S. armed forces (and “the militia of the several states”) under Article II, Section 2 of the U.S. Constitution. But as the Center for New American Security's Phillip Carter points out, authority over the actual composition of the military belongs to lawmakers thanks to the stipulation in Article I, Section 8 that Congress has the power to “raise and support armies …. provide and maintain a navy … make rules for the government and regulation of the land and naval forces.” Just as the president must seek congressional approval for declaring war and appointing inferior officers, so must lawmakers eventually approve changes to the armed forces.

Congress has certainly exercised that power with regards to LGBT service members in recent years. In 1993, 10 U.S.C. 654 established the “Don’t Ask, Don’t Tell” policy that required LGBT troops be separated from the military unless they “remain silent and chaste” about their sexuality, as the New York Times put it at the time. The legislation affirmed that Congress’s authority to decide policy concerning homosexuality in the armed forces derives from Article I, Section 8 regarding lawmakers’ obligation to “establish qualifications for and conditions of service in the armed forces.” In the case of transgender ban for service branches, it seems relatively clear that Congress may, er, trump Trump.

Indeed, it seems deeply unlikely that Congress will back Trump’s transgender ban, if only because, as Carter notes, the legislative policymaking process is more inclined toward rational deliberation and data-driven evaluation than the whims of a unitary executive. And that data is likely to refute Trump’s claims. According to a comprehensive 2016 RAND report on the subject, the estimated 1,320 to 6,630 transgender troops currently serving in the armed forces (a 2014 Williams Institute analysis estimates 15,500 trans service members) have had “minimal impact on unit cohesion.”

The underlying assumption is that if service members discover that a member of their unit is transgender, this could inhibit bonding within the unit, which, in turn, would reduce operational readiness,” the authors write. “In examining the experiences of foreign militaries, the limited publicly available data we found indicated that there has been no significant effect of openly serving transgender service members on cohesion, operational effectiveness, or readiness.”

As for those “tremendous medical costs” Trump cited, RAND projects that accepting transgender service members will only increase military medical costs between $2.4 million and $8.4 million annually, a negligible impact on active-duty military health expenditures. Hell, even if transition costs run an estimated $5.6 million annually as projected in a 2015 analysis, they represent paltry expenditure compared to the $84 million spent on erectile dysfunction prescriptions like Viagra.

“The number of U.S. transgender service members who are likely to seek transition-related care is so small that a change in policy will likely have a marginal impact on health care costs and the readiness of the force,” the authors write. “Even if transgender personnel serve in the military at twice the rate of their prevalence in the general population and we use the upper-bound rates of health care utilization, the total proportion of the force that is transgender and would seek treatment would be less than 0.1 percent.”

While Secretary of Defense James Mattis had previously postponed the accessions of transgender military volunteers to allow “further study” of the issue in the aftermath of his predecessor Ash Carter’s reversal of the transgender ban in 2016, it’s likely Pentagon officials will reach the same conclusion as RAND. And while Chairman of the Joint Chiefs of Staff Gen. Joseph Dunford identified in a June Senate committee hearing several potential problems in recruiting transgender individuals to bolster the military’s numbers, the empirical impact on the operational readiness of the military posed by trans troops seems relatively settled (Perhaps it’s telling that Trump’s tweets came while Mattis was on vacation.)

That said, the Supreme Court will ultimately make the final call as to what the law regarding LGBT service members actually is, and previous cases suggest the justices may not side with the Trump administration. In 2010, a U.S. District Court for the Central District of California judge ruled in Log Cabin Republicans v. United States the 10 U.S.C. 654 that the “Don’t Ask, Don’t Tell” LGBT ban constituted a violation of service members’ rights the First and Fifth Amendments and ordered a permanent injunction barring the Pentagon from enforcing the rule. While the United States Court of Appeals for the Ninth Circuit eventually granted the government’s request for a stay, the legislative repeal of the rule in 2011 rendered the judicial proceedings moot, effectively handing a victory to the Log Cabin Republicans. When it comes to Trump's transgender ban, chances are the same bench that has handed down some of the most significant rulings for LGBT rights in decades won’t punt at the chance for another victory.

Just weeks after the deadly ISIS-inspired Orlando nightclub shooting that left 49 Americans dead in 2016, then-candidate Trump pledged in his address to the Republican National Convention that he would do everything in his power as president “to protect our LGBT citizens from the violence and oppression of a hateful foreign ideology.” But in announcing his transgender ban a year later, Trump all but ensures that those words ring hollow to the LGBT service members who are actually risking their lives to protect citizens of all races, orientations, and creeds; what is certain, though, is that Congress will likely make sure the president gets the message.