Maura Sullivan was a Marine captain in Iraq. With a Sept. 11 primary fast approaching, two female congressional candidates are... 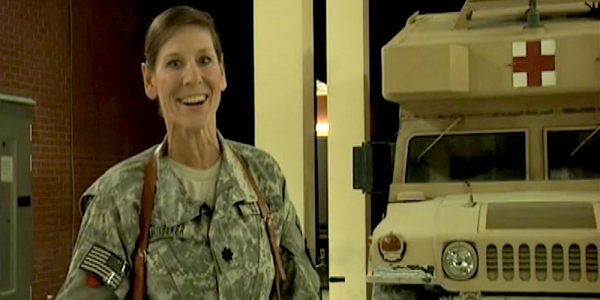 Maura Sullivan was a Marine captain in Iraq.

With a Sept. 11 primary fast approaching, two female congressional candidates are defending their military service after they were criticized for using the word “combat” in their political campaigns.

“It is sad and disgraceful that Ms. Sullivan would tarnish the memory of brave Marines to cover up her exaggerations about her service. Words have meaning and she was the one who chose to say she fought in Iraq when she did no such thing,” O'Rourke said. “She is the one who persisted in her lies after being called out. She is the one who chooses to question the integrity of others when she clearly has none herself.”

Sullivan countered that it's O'Rourke who's the disgrace and that his accusations reveal a “sexist and badly outdated” attitude toward women serving in combat zones.

“This attack comes from someone who clearly doesn't understand or value the role of women in the military, and it displays an appalling level of ignorance and disrespect toward both the women and the men with whom I served, and the families of many who made the ultimate sacrifice,” Sullivan responded.

“I've never gone around telling war stories or making myself out to be a hero. In fact, among the veterans community, it's not respected to boast about your valor, especially to demean the service of others.”

Over in the 2nd District, some veterans charge that retired Navy nurse and GOP candidate Lynne Blankenbeker of Concord is guilty of her own resume manipulation — pointing to her campaign signs that read “combat proven.”

“The 'combat proven' thing seemed to me to be close to stolen valor,” said Morrison, who is supporting state Rep. and Air Force veteran Steve Negron of Nashua in the GOP primary.

“That means you were in direct combat with the enemy and you acted appropriately. I don't think anyone should be separating and holding themselves up on a pedestal as veterans.”

A clearly upset Blankenbeker said Friday that Morrison and others who share his views should be “ashamed of themselves.”

“I was a combat nurse in a combat hospital in a combat zone caring for combat casualties while the hospital took on an average of 18 mortar attacks in a given day,” Blankenbeker said of her time in Afghanistan's violent Kandahar province during 2010-11.

“I'll let the readers decide for themselves whether that is combat proven. I am disappointed and disgusted about anybody questioning my service or anyone else's. They should be ashamed of themselves.”

Paul Chevalier of Hudson is widely viewed as the gold standard when it comes to veterans and political activism.

The Vietnam War veteran and retired Marine served 31 years and was state chairman of the Veterans of Foreign Wars. He organized veterans in both of Republican Sen. John McCain's victories in the first-in-the-nation presidential primaries of 2000 and 2008.

“If they were not in harm's way it bothers me in the sense they need to claim they were in combat but they weren't. However, people have been doing it for a long time,” Chevalier said.

There was Sen. Richard Blumenthal, D-Conn., who during his 2010 campaign admitted he had “misspoken” and given the impression he had served in Vietnam.

Blumenthal got five deferments during the Vietnam War and enlisted in the Marine Corps Reserve – serving in Washington, D.C., and Connecticut units doing drills and campground repairs.

“Now that was a case of stolen valor,” Chevalier said. “I haven't seen anything like that here.”

Sam Morningstar, author of the Combat Veterans Forum, wrote in a July 2017 commentary that the term combat veteran can be complicated.

“A military member or veteran that served in a combat zone might sometimes be called a combat veteran in certain contexts. However, some folks might have the view that an actual combat veteran is one that was directly involved in active combat while others might extend this definition a bit more,” Morningstar wrote.

O'Rourke said if Sullivan had served in combat she would have received a combat ribbon that the Navy, Marine Corps and Coast Guard give out, and he's demanded she produce one.

“I have never heard someone deployed to an area who didn't fight who said they fought. You would never use that word,” said O'Rourke, who's earned the Combat Action Badge the Army issues.

O'Rourke said this controversy makes Sullivan a risky nominee as Republicans will attack her on it.

“If she wins, we're screwed because this goes to her integrity,” O'Rourke said.

“It is clear that she lied about her service record.”

Sullivan pointed to a June 23, 2005, attack in Fallujah of a convoy blown up by a suicide vehicle bomb that killed three women in her division.

“That incident revealed to many what those who served already knew, that every one of our lives were put at risk every day in Iraq no matter what position we were in. Now, in the backward semantics of Washington in 2005, those women killed and wounded were not always recognized as combat veterans at the time,” Sullivan said.

“But the reality on the ground in Iraq was much different. Gender lines were erased because it was a conflict without front lines where attacks could come from any direction at any time. Any notions otherwise are sexist and badly outdated.”

“Campaigns should not be about questioning the legitimacy of someone's service to our country,” Moulton said in a statement.

“These petty attacks epitomize what's wrong with Washington politics. This is why we need a new generation of leaders like Maura Sullivan who understand a commitment to service.”

“Maura Sullivan served in Fallujah, Iraq, an incredibly dangerous area of operations where numerous Marines died, including female service members,” Helmer said. “Women in combat zones often don't get the recognition they deserve and we're shocked that anyone would call into question the sacrifices Maura and other female leaders made for our country.”

“I cared for a woman; she was an Afghan patient. I was cutting her clothes off in a combat zone and she had a wire harness on her for an explosive,” Blankenbeker said. “I had to hold that explosive device in my hand until we could get her sedated on morphine. Is that combat proven?”

Chevalier, the retired VFW commander, said these debates can get sensationalized and be confusing to the public.

“Everybody in a combat zone doesn't get shot at but they were exposed to it. In Vietnam if you were in the rear of the lines sometimes you were in the greatest danger,” Chevalier said.

“You don't get to pick where you go in the military. You go where you are sent and do the best job you can. End of story.”