Spc. Enrique Roman-Martinez was camping with fellow paratroopers on an island at Cape Lookout National Seashore when they say he disappeared on May 22 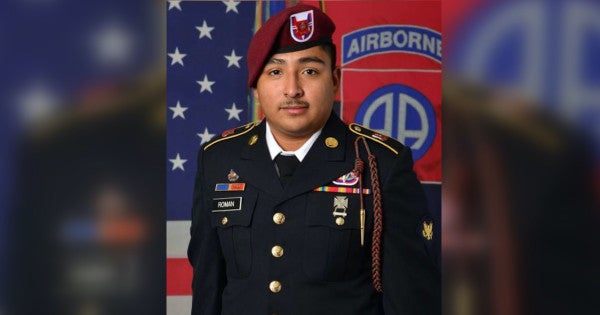 Griselda Martinez knew something was horribly wrong when she found out that her brother was missing and he didn't have his glasses, because he rarely took them off.

Her brother, Spc. Enrique Roman-Martinez, was camping with fellow paratroopers on an island at Cape Lookout National Seashore when they say he disappeared on May 22. Part of his body washed up on the beach a week later.

Maj. Gen. Christopher Donahue, commander of the 82nd, said in a statement released Thursday that Roman-Martinez was a valued member of the division. He said his condolences remain with the soldier's family, friends and fellow paratroopers.

“My family's thoughts — and the thoughts of the leadership of the 82nd Airborne Division — are focused on Enrique's family and battle buddies as we mourn together,” Donahue said.

“Enrique volunteered to serve the nation and as a paratrooper in the 82nd Airborne Division.”

Donahue said the division lost Roman-Martinez to a senseless act of violence.

“We are doing everything we can to support his family and find justice for Enrique,” he said. “I've personally spoken with his family to assure them that we will not stop in our pursuit to bring those responsible to justice.”

Michael Coleman, who served as chaplain for Roman-Martinez, said his “heart dropped” when he heard the soldier was missing.

Coleman, who retired from the Army in February, said Roman-Martinez was a solid paratrooper. Roman-Martinez had come to Coleman's house for dinner and went on a camping trip with Coleman's family.

“He was like a son to me,” Coleman said. “My kids thought the world of him.”

Now, Coleman is trying to help the soldier's family understand and deal with how the military works.

“As chaplains, we take care of soldiers in life and death,” he said.

Coleman and the family want to know who killed Roman-Martinez and why. Coleman also thinks a memorial ceremony should be held for the paratrooper.

An 82nd spokesman said the paratrooper's unit is planning to hold a memorial ceremony in the near future.

The Army has offered a $25,000 reward for “credible information leading to the apprehension and conviction of” whoever killed the soldier. Anyone with information should call 910-396-8777, submit anonymous information via www.p3tips.com, or contact a law enforcement agency.

Donahue, the 82nd's commander, mentioned the reward in his statement.

“I encourage anyone with information related to this case, regardless of how small, to contact the Fort Bragg CID Office,” he said.

Army officials have said they aren't releasing much information because of the ongoing investigation.

“They've asked us not to say anything that might impede the investigation or keep them from arresting someone,” she said.

Martinez said investigators are working hard on the case. She said she believes there are people of interest, but so far the investigators don't have enough evidence to charge anyone.

“That's the whole problem,” she said.

Martinez said she and her mother, Maria, flew to North Carolina as soon as they could after they heard her brother was missing. She said they were discouraged when they saw that the island he was on was small with few trees and when they heard that his personal belongings were at the campsite.

“For them to say he left his glasses was a huge red flag,” she said. “My mother and I knew something was wrong.”

Martinez said she was close with her brother. She said they and their sister had a rough childhood. Their mother worked two jobs and raised them by herself, she said.

Roman-Martinez joined the Army when he was 17, his sister said. He thought it would teach him discipline and responsibility and give him a way to go to college, she said.

The paratrooper volunteered two more times and had awards and decorations that include the Army Good Conduct Medal, National Defense Service Medal, the Global War on Terrorism Service Medal, the Army Service Ribbon and the Army Parachutist Badge, according to Army officials.

Martinez said the soldier's family is in pain.

“My mom doesn't sleep,” she said. “She stays up all night thinking about what might have happened.”

Martinez said there are inconsistencies in what is known about her brother's death. She said the other soldiers said they saw him last about midnight, but he wouldn't have gone for a walk in the dark and wasn't a good enough swimmer to go into the ocean at night.

A 911 caller said Roman-Martinez might have killed himself, but his sister feels sure that he wouldn't have done that. A coroner ruled the death a homicide, she said.

Martinez said she wants those who know what happened to think about their mothers and their siblings.

“Someone has to know something,” she said.

“I think something happened, something went wrong and it went downhill quickly,” he said.

Roman-Martinez was willing to fight for and, if necessary, die for his country, Coleman said.

“As a nation, we need to do right by this soldier,” he said. “Something happened to that kid. I don't know what it is, but the truth has to come out.”