Frida The Rescue Dog Is Saving Lives After Mexican Earthquake

One of Mexico’s most beloved rescuers wears wide protective goggles, a harness and two pairs of boots. Frida is the... 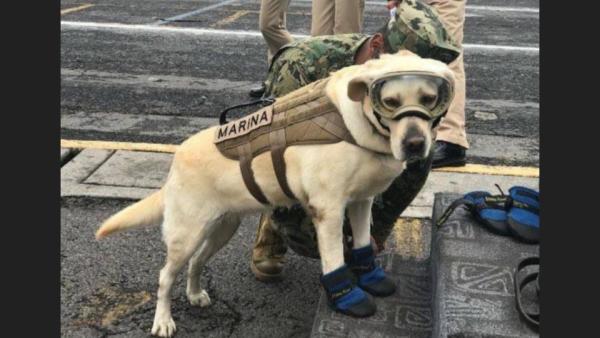 One of Mexico’s most beloved rescuers wears wide protective goggles, a harness and two pairs of boots.

Frida is the star of the Mexican navy’s Canine Unit. Throughout her career, the 7-year-old Labrador has detected 52 people — 12 alive — in various natural disasters.

She detected the body of a police officer in Juchitan after an earthquake hit the state of Oaxaca two weeks ago.

Now her handlers in Mexico City are hoping she will find survivors of Tuesday’s magnitude 7.1 earthquake, which killed more than 270 people in five states. The quake’s epicenter was in the state of Puebla, about 80 miles southeast of the capital.

Fifteen dogs have been deployed to search for people in Mexico City, but none has as many Twitter admirers as Frida. The navy tweeted a collage of photos of Frida last week, announcing her 52 rescues to the social media world. It got more than 4,000 retweets and nearly 7,000 likes. People called her a symbol of hope, a hero and offered to send her more boots to keep her paws safe. (She and the other rescue dogs have enough.)

Here’s what some of her fans say:

“She should rest a little. She has worked a lot. God take care of you, your work is not easy.”

“Now you know why they say that dogs are man’s best friend.”

Frida the Labrador has been praised by Mexico's president for her bravery in rescuing earthquake victims pic.twitter.com/mfUFwEUhAj

Someone even suggested she replace the painter Diego Rivera on the 500-peso note.

Frida was dispatched Tuesday to the collapsed Enrique Rebsamen school, where 11 children were found alive and 25 people, including 19 children, were found dead. Other emergency workers found them.

On Thursday afternoon, she napped in a break room with two Belgian Malinois colleagues, Evil and Echo. Frida’s handler, Israel Arauz Salinas, said she had suffered from exhaustion after searching the school Wednesday. But he said she was back in good spirits Thursday after drinking water with electrolytes and getting some rest.

Salinas said that because of Frida’s age, Evil and Echo, who are a year and a half old, usually go into collapsed buildings first. If they detect a person, Frida follows up to confirm. She usually spends no more than 20 minutes inside.

Salinas said they bark if they detect signs of life. If they find a corpse, they stop suddenly, then carefully proceed.

“They act afraid,” he said. “That indicates to us that there is a cadaver.”

He said the spaces that Frida and the other dogs have had to search are less than 20 inches high. In some places, the dogs had to crawl, getting much deeper into the rubble than rescuers could.

Salinas said the dogs are selected for service at 2 months old. They receive training that determines whether they will go into detection of narcotics, explosives or people.

For detection of people, the training starts by throwing toys such as balls. Once the dog gets used to fetching, the trainer begins running with the toy in hand.

“They start associating the smell of the person with the reward of the ball,” he said, adding that they train for about 3 hours a day for a year before being sent out to disaster sites.

Frida’s skills are applied not only in Mexico. Salinas said she was in Ecuador during the earthquake of April 2016.

By Thursday afternoon at the school in Mexico City, officials said that all children had been accounted for, but that one person might still be alive and trapped inside.

That means there’s still a chance Frida could be sent to find out.