Get Ready For Concealed And Open Carry On Military Bases 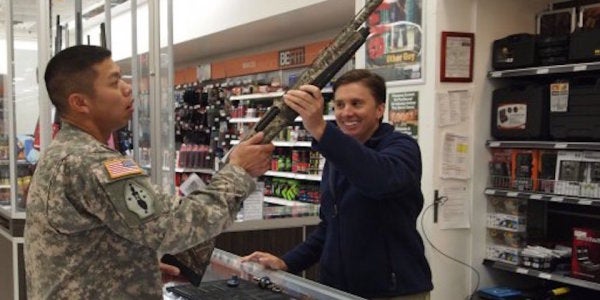 The Pentagon recently released detailed guidance that allows U.S. military personnel to carry privately owned, concealed firearms on base, a move that the Army's service chief argued against publicly.

“Arming and the Use of Force,” a Nov. 18 Department of Defense directive approved by Deputy Secretary of Defense Robert Work, lays out the policy and standards that allow DoD personnel to carry firearms and employ deadly force while performing official duties.

But the lengthy document also provides detailed guidance to the services for permitting soldiers, sailors, airmen, Marines and Coast Guard personnel to carry privately owned firearms on DoD property, according to the document.

Commanders, O-5 and above, “may grant permission to DoD personnel requesting to carry a privately owned firearm (concealed or open carry) on DoD property for a personal protection purpose not related to performance of an official duty or status,” the document states.

Applicants must be 21 years of age or older, the age many states require an individual to be to own a firearm, according to the document. Proof of compliance may include a concealed handgun license that is valid under federal, state, local or host-nation law where the DoD property is located.

“Written permission will be valid for 90 days or as long as the DoD Component deems appropriate and will include information necessary to facilitate the carrying of the firearm on DoD property consistent with safety and security, such as the individual's name, duration of the permission to carry, type of firearm, etc.,” according to the document.

Until now, DoD personnel have not been authorized to carry personal firearms on military installations, a policy that has come under scrutiny in the wake of “active-shooter” attacks at U.S. military bases resulting in the deaths of service members.

Lawmakers have questioned military leaders about the policy, arguing that allowing service members to be armed might have prevented attacks such as the July 16, 2015, shootings at two military facilities in Chattanooga, Tennessee, in which four Marines and a sailor were shot and killed. The gunman, Muhammad Youssef Abdulazeez, was killed by police in a gunfight.

Related: Why Does The Military Ban Soldiers From Carrying Guns? »

But Army Chief of Staff Gen. Mark Milley has argued against reversing the DoD policy that prohibits service members from carrying concealed weapons on post.

Testifying at an April 14 congressional hearing, Milley cited the Nov. 5, 2009, mass shooting at Fort Hood, Texas, in which 13 people were killed and 42 others were injured. The day of the shooting, Nidal Hasan, then an Army major and psychiatrist, entered the Fort Hood deployment center carrying two pistols, jumped on a desk and shouted “Allahu Akbar!” — Arabic for “God is great” — then opened fire.

Milley defended the short time it took for law enforcement to secure the scene and said he is not convinced that allowing soldiers to carry privately owned weapons would have stopped Hasan.

The eligibility requirements also state that applicants should not be subject to past or pending disciplinary action under the Uniform Code of Military Justice or in any civilian criminal cases.

Personnel carrying firearms “will not be under the influence of alcohol or another intoxicating or hallucinatory drug or substance that would cause drowsiness or impair their judgment while carrying a firearm,” the document states.