Report: Hawaii Wasn’t Even Close To Ready For Its False Missile Alert

An emergency preparedness report prepared in the aftermath of the Jan. 13 false missile alert recommends that the state spend... 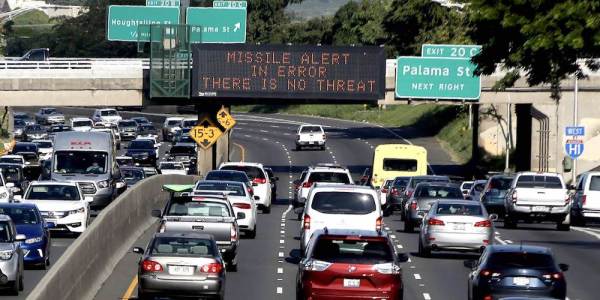 An emergency preparedness report prepared in the aftermath of the Jan. 13 false missile alert recommends that the state spend millions to enhance its disaster-response capabilities, improve technology and infrastructure, and implement community preparedness training.

Hara’s report agreed with an earlier investigative report, released by Brig. Gen. Bruce Oliveira on Jan. 30, that found widespread mistakes in HI-EMA’s action on Jan. 13 and the government’s response.

But Hara’s report also identified a need for Hawaii Emergency Management Agency to prepare a strategic plan and update its All Hazards Catastrophic Plan to include chemical, biological, radiological and nuclear scenarios. It also recommended including all emergency management stakeholders in future planning.

“Emergency Management challenges for Hawaii will not improve without a concerted and persistent effort by the whole community, particularly due to the inherent obstacles stemming from geographical isolation, economic hurdles of transportation, and distribution of material and energy,” the plan says. “The January 13, 2018 incident was an avoidable mistake. But Hawaii’s major vulnerabilities affecting preparedness will amplify the risks to the communities and all economic sectors when no actions are taken to reduce those vulnerabilities and to close the capability gaps as much as possible.”

Related: The Emergency Worker Behind Hawaii’s False Missile Alert Actually Thought The US Was Under Attack »

“We are moving forward with a strategic vision that enables emergency managers in Hawaii to identify gaps and vulnerability for handling all hazards,” Ige said. “It’s all about the safety and security of the people of Hawaii. This is the beginning of a process.”

Hara’s report recommends spending roughly $800,000 to coordinate with the Hawaii Department of Defense to produce an effective and functional strategic plan. The report estimates that updating the All Hazards Catastrophic Plan and reviewing the feasibility of re-instituting “fallout shelters” could cost about $875,000.

The report also recommends coordinating state appropriations submissions “to mitigate current shortfall and future programs essential to preparedness.” Under this category, construction of a Joint Emergency Management Center is estimated at $135 million, with costs to be determined for the build-out of the Hawaii-Emergency Management Agency annex.

Cost estimates also must be determined to establish a statewide evaluation program, a second deep-draft port study to include construction and ports improvement, and for improving county civil defense programs.

Related: What You Should Know About Hawaii’s Ballistic Missile False Alarm, According To A Former Navy Emergency Manager »

Ige assigned Hara signed an executive order on Jan. 15 calling for Hara to conduct a “comprehensive review” and to provide an initial “action plan.” The request came two days after Hawaii residents and tourists spent up to 38 minutes thinking that a nuclear attack was imminent because a state employee in a Diamond Head bunker sent out an alert warning of an incoming ballistic missile and warning, “This is not a drill.”

The incident was covered extensively by news media throughout the world. It has occupied the focus of state and federal lawmakers and has prompted an investigation from the Federal Communications Commission and an after-action review by the Federal Emergency Management Agency.