Here’s Why I Support The Bowe Bergdahl Deal

In a recent piece imploring veterans to stop using the uniform to make political points, I mentioned that I supported... 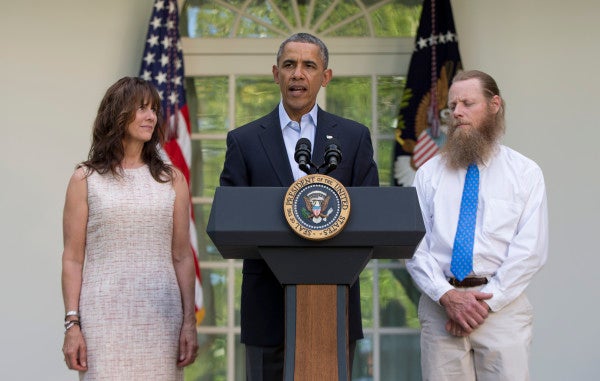 In a recent piece imploring veterans to stop using the uniform to make political points, I mentioned that I supported the recent exchange of Army Sgt. Bowe Bergdahl for five Taliban commanders.

I meant it as an aside; proof that we don't all share the same politics. But it was all some people seemed to care about.

“I was with you until you said you supported the exchange,” one commenter wrote. “How is that even possible?”

Unlike a lot of folks fast-roping in on this story, I've tracked Bergdahl's situation for a long time. A longtime admirer of the late Michael Hastings, I consider his long-form piece on Bergdahl's disappearance to be among his finest work. In my own capacity, I covered U.S. negotiations with the Taliban to release Bergdahl in a piece for Business Insider this time last year.

Leaving Bergdahl behind amid suspicions that he deserted sets a terrible precedent for the treatment of future U.S. soldiers.

I have little doubt that Bergdahl walked away from his post, but no one except him knows why. According to some reports, he grew disillusioned with the American mission in Afghanistan. He's hardly the first. But a former member of his platoon told Fox News that Bergdahl expressed a desire to have a more aggressive strategy against the Taliban. According to some sources, he sought to walk from Afghanistan, clear across Pakistan to India. According to others, he sought out the Taliban in an effort to negotiate with them directly.

Regardless of his motivation, it was stupid. Throughout human history, men have done stupid, selfish things; war is certainly no exception to that rule.

There is no asterisk assigned to the military ethos leave no man behind. If there were, what would it say? Unless it was your fault you were captured in the first place?

Does that mean we shouldn't go after a soldier who lags behind on patrol and is captured by the enemy? A man who falls asleep at his post? A pilot who stalls his aircraft due to pilot error and is forced to eject?

Ultimately, there's a reason the safe return of a U.S. soldier carries such a hefty price tag — because we are the United States of America and we go after our own.

There’s a perception that the United States shouldn’t have traded five Taliban operatives for Bergdahl’s safe return. In an interview with an Illinois radio station, Republican Rep. Aaron Schock from Illinois said, “giving five known leaders out of Guantanamo Bay in exchange for this fella is a huge mistake.”

Schock added, “Five to one? I don’t care whether you’re trading jelly beans for chiclets, five to one ain’t a fair trade.”

The congressman, who also repeatedly erroneously referred to the released operatives as members of al Qaeda, rather than the Taliban, reflects a lack of understanding on how prisoner exchanges work.

In 2011, Israel traded 1,027 Palestinian prisoners for a single soldier, the first released alive in 26 years. Previously, in 1985, Israel released 1,150 prisoners in exchange for three Israeli soldiers.

The 1973 deal that released Republican Sen. John McCain from a North Vietnamese prison camp involved trading 2,600 North Vietnamese soldiers for 591 American lives. Forty-one years later, McCain is a staunch opponent of the Bergdahl deal, after initially supporting it in principle earlier this year.

Opponents of the exchange have also said that the Taliban operatives will definitely end up back on the battlefield, but there’s a couple of reasons that this is a weak argument. First of all, as a condition of the deal, they’re confined to Qatar for at least one year. But more importantly, according to an extensive report in the Daily Beast by Josh Rogin and Eli Lake, the men wanted to leave the Taliban, or at least cooperate with the U.S. or Afghan government, to begin with. Of the five prisoners, two of them surrendered to Northern Alliance forces, one tried to defect from the Taliban and join the Afghan government, one was working with the CIA, and another was working with U.S. intelligence officials. Two lifelong foreign policy professionals, John Brennan, the director of the CIA, and Denis McDonough, the White House chief of staff, long advocated trading them in a deal.

Another area of controversy surrounding the deal is that under the National Defense Authorization Act, the president is compelled to give Congress 30 days of notice before detainees are released from Guantanamo Bay, and the Obama administration failed to do so. The administration has claimed that concerns about Bergdahl’s health rendered this impossible, that the operation moved too quickly, and that the Taliban threatened to kill Bergdahl if news of the exchange leaked.

The contention on that last point is that had Congress been informed, one of the members would have told the press. An unnamed source told Fox News that this claim is “ridiculous,” since “notifying Congress does not make it public.”

In congressional hearings with U.S. Secretary of Defense Chuck Hagel, Rep. Adam Smith, a Democrat from Washington, said, “There’s no reason that 30-days notice couldn’t have been given to congressional leadership. We can in fact keep a secret. Or I’d say we’re no worse at it than the administration.”

But in the radio interview where he weighed in on the Bergdahl deal, Schock said the opposite. “This was never going to remain a secret,” he said when asked whether it would be leaked by members of Congress, claiming that having that information released to the public wouldn’t jeopardize Bergdahl’s life.

Lastly, critics of the Bergdahl deal also cite an oft-used phrase in American foreign policy: “The United States does not negotiate with terrorists.” Except for when we do. There's a big asterisk on that sentence, not as a result of my personal politics or philosophies, but proven countless times in modern American history.

The 2007 surge in Iraq, orchestrated by retired Army Gen. David Petraeus, and credited with dramatically decreasing the violence of that war, was facilitated by the Anbar Awakening, where Sunni tribal leaders partnered with U.S. and coalition forces rather than continuing to ally themselves with al Qaeda. Some of the same fighters who made up the ranks of the Iraqi security forces had just months before been laying improvised explosive devices and fighting American forces. No one serious called the Anbar Awakening tantamount to negotiations with terrorists.

The U.S. has also recently been speaking with Hamas in Palestine, an organization designated as a terrorist organization, but was also democratically elected into control of the Palestinian government in 2006. That’s clearly negotiating with terrorists.

In 1993, when Army Chief Warrant Officer 3 Michael Durant was captured by Somali fighters during the Black Hawk Down incident, the Clinton administration sent a former career diplomat and a Marine general to negotiate with the warlord for his safe return. The Washington Post’s Dan Lamothe notes significant differences in that situation, but it was nonetheless a negotiation between the United States and a violent non-state actor for the safe return of a U.S. service member.

In virtually every U.S. conflict where service members have fallen into enemy hands, the U.S. has negotiated for their safe return. As President Barack Obama said in an interview with NBC News, “By definition, you don’t do prisoner exchanges with your friends, you do them with your enemies.”