Iran to hold joint naval drills with Russia and China

China, Iran and Russia will hold joint naval drills starting on Friday in the Indian Ocean and Gulf of Oman, China's defense ministry said on Thursday, amid heightened tension in the region between Iran and the United States 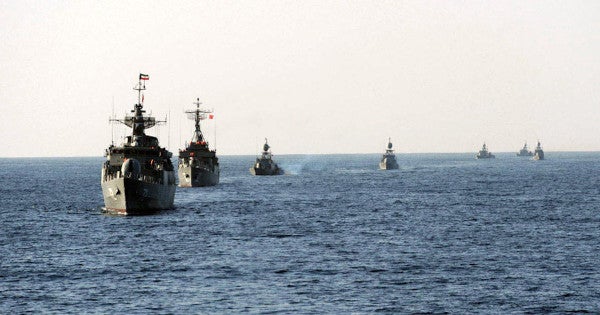 BEIJING (Reuters) – China, Iran and Russia will hold joint naval drills starting on Friday in the Indian Ocean and Gulf of Oman, China's defense ministry said on Thursday, amid heightened tension in the region between Iran and the United States.

China will send the Xining, a guided missile destroyer, to the drills, which will last until Monday and are meant to deepen cooperation between the three countries' navies, ministry spokesman Wu Qian told a monthly news briefing.

The drill was a “normal military exchange” between the three armed forces and was in line with international law and practices, Wu said.

“It is not necessarily connected with the regional situation,” he said, without elaborating.

The Gulf of Oman is a particularly sensitive waterway as it connects to the Strait of Hormuz – through which about a fifth of the world's oil passes – which in turn connects to the Gulf.

The drills are also coming at a time of fraught tensions between the United States and Iran.

Friction has increased since last year when U.S. President Donald Trump pulled the United States out of Iran's 2015 nuclear deal with six nations and re-imposed sanctions on the country, crippling its economy.

Washington has proposed a U.S.-led naval mission after several attacks in May and June on international merchant vessels, including Saudi tankers, in Gulf waters which the United States blamed on Iran. It denies the accusations.

Tension has risen in the region not only over Iran's disputed nuclear program but also over a September attack on Saudi oil facilities blamed on Iran by the United States and Saudi Arabia. Iran also denies involvement.

The Indian Ocean and Gulf of Oman are key areas for international trade and maintaining security in the waterways is an important task, Brigadier General Abolfazl Shekarchi, spokesman for Iran's armed forces, said on Wednesday, according to the official IRNA news agency.

“This drill will take place for supporting and increasing experience in the security of international trade in the region,” he said.

China has close diplomatic, trade and energy ties with Iran.

But China also has good relations with Iran's regional rival Saudi Arabia, meaning it has long had to tread a fine line in a part of the world where it has traditionally exerted far less sway than the United States, Russia, France or Britain.

Chinese President Xi Jinping is likely to visit Saudi Arabia next year as it is the host of the 2020 G20 summit.