Will Jeff Sessions Sink The VA’s Interest In Medical Marijuana For Vets? 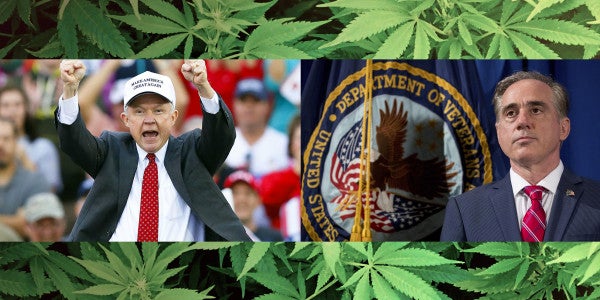 In an exclusive sit-down interview with Task & Purpose June 12, Veterans Affairs Secretary David Shulkin made clear his department would pursue any emerging therapy with promise for disabled or troubled veterans — including medical marijuana.

“We are acutely aware of the work that’s going on around the country, particularly in states that have legalized medical marijuana,” Shulkin said, adding that he’d be interested in a change in federal cannabis laws “should that research get stronger.”

There’s only one problem: One of Shulkin’s top colleagues in the Trump cabinet wants to crack down on that research.

Hours after Task & Purpose’s interview with the VA secretary, excerpted above, news broke that Attorney General Jeff Sessions had asked congressional leaders to empower him to prosecute medical marijuana providers in states where the therapeutic drug is legal.

“Drug traffickers already cultivate and distribute marijuana inside the United States under the guise of state medical marijuana laws,” Sessions wrote in a May 1 memo to the four top party leaders in the House and Senate. “In particular, Cuban, Asian, Caucasian, and Eurasian criminal organizations have established marijuana operations in state-approved marijuana markets.”

In his memo, Sessions — a former Alabama senator who has long championed states’ rights to pursue their own laws, independent of federal controls — asked lawmakers to give him an exception to a 2014 law that bars the DoJ from using its federal budget to interfere with state laws “that authorize the use, distribution, possession or cultivation of medical marijuana.”

“Marijuana use is linked to an increased risk of psychiatric disorders such as psychosis, respiratory ailments such as lung infections, cognitive impairments such as IQ loss, and substance use disorder and addiction,” the attorney general wrote, citing an info sheet put out by the National Institute on Drug Abuse in February.

That position is consistent with statements Sessions made as a senator; in a hearing last year, he argued for stronger anti-pot laws, saying “Good people don’t smoke marijuana”:

But Sessions’ sentiments, then and now, run counter to a growing body of research out there on medical pot showing that it's relatively benign and popular — including a broadening consensus that opioid addictions are lower in states that legalize weed for medicinal use, the Washington Post notes.

More concerning, Sessions’ ideas on pot could jeopardize the VA’s interest in medical marijuana — an interest so strong that Shulkin mentioned it in a major White House press conference last month, and discussed it again in depth with T&P yesterday.

“Currently, federal law prohibits us from doing research on medical marijuana or prescribing medical marijuana,” Shulkin, a physician, told Task & Purpose. “We don’t make the laws of the country, we follow them. So that would be up to a law change.”

But, he added, there was lots of promise for vets in research being done on weed legally:

We are acutely aware of the work that’s going on around the country, particularly in states that have legalized medical marijuana. And we’re certainly looking at the research that’s coming out. And we do encourage new ideas to be tested, and we are observing very closely work that’s being done that may be helping veterans, and we are open to any ideas and therapies that may be effective.

We do believe that the science is improving in how to use medicinal preparations of marijuana that, where you decrease the hallucinogenic response and increase the medicinal effect, and should that research get stronger, we would hope that that, we’d be taking a look at, so that if a law change at the federal level is appropriate, that could happen.

Asked whether VA had additional steps it could take to move that research forward, Shulkin replied, “We do not”:

We are not able to participate in research regarding the medicinal uses of marijuana. We are able to, um, when marijuana is prescribed by another physician in a state where it’s legal, we are able to discuss that with the veteran as part of their overall care. But it is not within our legal scope to study that in formal research programs or to prescribe medical marijuana, even in states where it’s legal.

That means, barring a change from Congress, Shulkin and the VA would rely entirely on pot research in legal states — the very research that Sessions wants to crack down on.

For their part, veteran advocates for medical marijuana research seem unfazed by Sessions’ stand against pot. The 2 million-member American Legion, which has an official resolution calling for more research into medicinal pot as therapy for PTSD, TBI, chronic pain, and other maladies, has also called for the drug to be taken off the government’s schedule of controlled substances to enable more study of its effects.

“I think it’s fair to say that we are encouraged by Secretary Shulkin’s recent comments about the medicinal potential of cannabis,” Joe Plenzler, director of media relations at the Legion’s national headquarters, told Task & Purpose in an email.

“We simply want the federal government to enable more research into the potential of cannabis to treat myriad illnesses confronting our veterans,” he added. “We hope to learn from this research and enable a fact-based national discussion on the future of the drug.”