"Obviously, it's not a cure. But we have had dogs literally save a life." 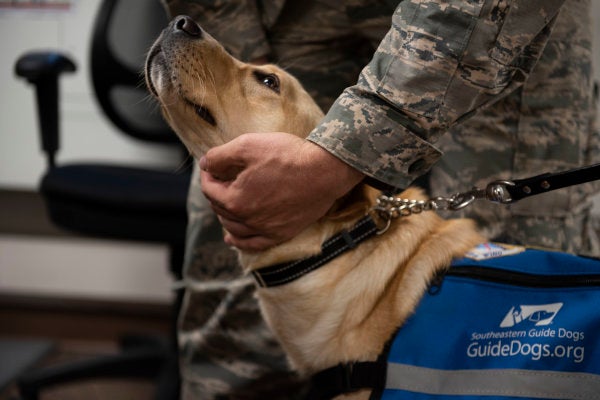 At 13 pounds, Sandy may not look like your stereotypical service dog. The Shih Tzu-yorkie mix, found abandoned in an alley, has a face that seems more doll-like than dutiful.

But for owner Teri Pleinis — a 23-year Army veteran diagnosed with PTSD after serving in Iraq — Sandy has been life-changing.

“I've already been able to decrease my meds because Sandy is around to help me — and I've only had her two months,” said Pleinis, who lives in Tampa. “She's like, 'I'm here for you, Mom.' She'll sense when I start getting anxious and she'll just crawl into my lap.”

Pleinis and Sandy are in training at the nonprofit K9 Partners for Patriots, an 11,000-square-foot facility in Brooksville, 75 miles west of Orlando, that has won four grants from the U.S. Department of Defense since opening in 2014. To date, it has helped nearly 300 veterans with post-traumatic stress disorder, traumatic brain injury and military sexual trauma heal from the invisible wounds of war.

But unlike other programs that train specific dog breeds and then place them with veterans, K9 Partners for Patriots selects dogs from pet shelters and rescue groups based on temperament — or uses the veteran's own dog — and then trains both the veteran handlers and the dogs together. It's a 19-week course that has produced nearly 300 graduates from 31 Florida counties, including those in Lake, Orange, Osceola and Seminole.

“We have rescued over 140 dogs so far, many slated for euthanasia,” said Mary Peter, a certified master dog trainer who founded the organization. “But we want to use the veteran's dog if it's social enough and well-balanced mentally to come into the program. If it already has a bond with that veteran, we don't need to reinvent the wheel.”

The dogs are first tested for their ability to sense and react to the stress hormones released when a veteran is anxious or panicky. They also have to be relatively young — ideally, 9 months to 3 years — and be calm, confident and friendly with adults, children and other dogs.

They can be massive Bernese mountain dogs or tiny Lhasa apsos, stately German shepherds or playful Dachshunds. Or anything in between.

“When we test the dogs, we walk the dog around, and we watch,” Peter said. “If it jumps in everybody's lap, kisses everybody, loves everybody, that dog's a no. It'll be a great pet for someone, but we need a dog that senses adrenaline, and then pulls toward that veteran who is releasing it. And most of the time when this happens, the dog will then lay or sit in the lap of that veteran, and you can't pull him away. It is beautiful to watch.”

That's how it was for John Taylor, 39, a medically retired Army warrant officer who has battled the effects of PTSD, traumatic brain injury, vertigo and tinnitus for a decade. Pinned on a rooftop during the siege of Sadr City, Iraq, for eight hours, he saw his best friend die.

“I lock myself up. I don't go anywhere really, and if I do it's very short and I don't go by myself,” he said one day in December, as he was just starting the program. “I don't do well when there's a lot of people.”

As he talks, a rescued Rottweiler named Levy, found in the woods, nudges Taylor with his nose, then stares longingly into his eyes, trying to coax his attention.

“That dog is working for him right now,” Peter said.

Taylor gazes back and stroke's the dog's head.

“I hope he helps me, you know, get back out there,” he said.

The program is free to veterans, who can come back indefinitely after they graduate for the camaraderie and advice. They also get free pet supplies, help with dog food and medication if they need it plus peer-support counseling groups.

“It's amazing what happens here,” said Denny Brown, a licensed clinical social worker with the program. “Obviously, it's not a cure. But we have had dogs literally save a life” that otherwise would have been lost to suicide.

The best thing about a service dog, Brown said, is its constant presence.

“So if the veteran is having an issue at night — whether it's nightmares or anxiety — the dog is right there,” he said.

Researchers from the University of Central Florida, the University of South Florida and the private Saint Leo University are studying the work at K9 Partners for Patriots to document the impact. And so far, before and after assessments show it's working, said James Whitworth, an associate professor at UCF's School of Social Work who has counseled military members and their families.

“Participants in this program consistently report statistically significant improvements in their social/relational functioning and in their mood, along with reductions in the PTSD-related difficulties from pre-test and post-test,” Whitworth writes in a recently published study of 43 veterans who were evaluated using a standardized trauma symptom survey. “They are also able to describe in their own words how training and having a service dog is greatly helping them to get better. Most notably, participants are far more willing to start and complete this program for their PTSD compared to standard trauma treatments such as prolonged exposure and cognitive-processing therapy.”

At a time when 22 veterans and active-duty service members take their own lives each day — and suicide rates have soared among younger veterans — advocates say the need for K9 Partners for Patriots and programs like it is critical.

“We're troubled by the apparent failure on the part of the Department of Veterans Affairs to reduce the veteran suicide rate,” said Gregg Laskoski, the charity's communications director. “Frankly, the VA may be complicit in contributing to a significant number of veteran suicides because for decades it has opted for pills, pills and more pills — to the exclusion of alternative therapies,” such as service dogs.

Pleinis doesn't disagree. Though VA doctors helped her survive, she wanted an alternative to the litany of medications they prescribed.

“I'm on a lot of them, but not as many as I used to be, and I hope to be able to stop altogether,” she said.

Still suffering from anxiety, nightmares and a severe startle response, the mother of two went through five attempted pairings with canine partners before Sandy came along in early October.

“I was disappointed at first, but I truly believe God has a plan,” Pleinis said. “And then they brought in Sandy and she was like, 'Hi, I'm here!' And she jumped in my lap. Now, Sandy is my medicine. She's helping me be happier.”