‘The Kill Team,’ now a feature, revisits one of the most disturbing tales of the Afghanistan war 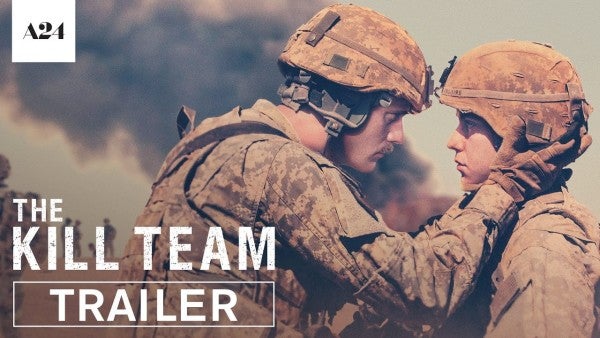 The Kill Team is a new dramatic feature based on the controversial 2013 documentary of the same name. Documentary director Dan Krauss developed and directed the new movie, which tells the story of an Army unit exposed for killing civilians during a deployment to Afghanistan. Eleven U.S. troops were eventually convicted or crimes related to the killings.

All the real players have been renamed for the new movie. Alexander Skarsgard (“True Blood,” “Pretty Little Lies”) plays the brutal squad leader Sgt. Deeks. He directs his platoon to murder innocent civilians, and the killings make young Pvt. Andrew Briggman (Nat Wolff from “The Naked Brothers Band”) question whether he should inform the brass about what's going on.

Independent studio A24 has just released a trailer for the film.

Krauss' story isn't exactly a good-versus-evil tale, because both Briggman and the real soldier who inspired the character eventually chose to participate in the killings. The documentary tells a much more nuanced story than you'd expect, and it won't be a surprise if this feature carries over that ambiguity.

The Kill Team opens in theaters and on-demand on Oct. 25.