The Resurgent Conflict Between The Iraqi Government And The Kurds, Explained

In the aftermath of a U.S.-led invasion of Iraq and amid the coalition’s domination of its airspace, Iraqi government forces... 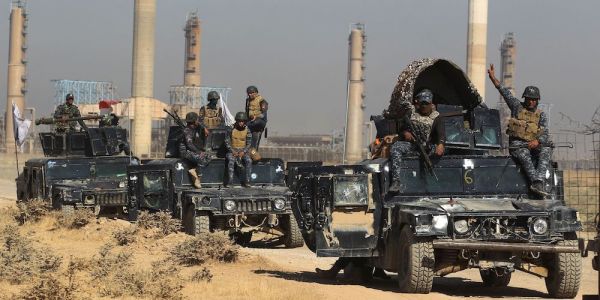 In the aftermath of a U.S.-led invasion of Iraq and amid the coalition’s domination of its airspace, Iraqi government forces responded to a bid for independence by the ethnic Kurds in the northern part of the country with force, deploying military assets to secure the region’s oil-rich refinery cities and solidify Baghdad’s long-term control over the country.

Sound familiar? It’s the story of the last major pre-9/11 Kurdish uprising, a series of rebellions that shook Iraq in years following Operation Desert Storm and the imposition of no-fly zones by the United States, United Kingdom, and France. But 26 years later, the exact same story is playing out once again — and the stakes have never been higher.

Following a historic referendum by the Kurdistan Regional Government (KRG) on Sept. 25, Iraqi Prime Minister Haider al-Abadi ordered government forces into the oil-rich city of Kirkuk to “impose security” on the region. And with the United States caught in a complicated balancing act between two allied forces as Iran and other foreign powers seeks to fan the flames of conflict in within its former enemy, the increasingly complex and violent conflict threatens not just to destabilize the entire region, but derail a multinational campaign against ISIS on the brink of victory.

Peshmerga soldiers fire their guns in the air to celebrate the referendum on the road outside a voting station on September 25, 2017 in Kirkuk, Iraq. Despite strong objection from neighboring countries and the Iraqi government. Some five million Kurds took to the polls today across three provinces in the historic independence referendum.

How did this conflict with the Kurds start?

On Sept. 25, millions of ethnic Kurds went to the polls to formally establish the semi-autonomous region’s independence from the Iraq and end “a century of despair and neglect,” as the Washington Post put it. Roughly 92% of the 3 million Kurds in the region voted in favor of independence. Despite the gravity of the vote, the political rebellion is nothing new: Kurdish independence pushes have been a fixture of Iraqi political life since the unique political and legal status of the region was considered during the Iraqi-Kurdish Autonomy Agreement of 1970.

But although Kurdistan had de facto autonomy as a federal polity within Iraq after government troops pulled out of the region following the 1991 popular uprisings, the KRG had been planning a full-blown referendum since as Iraqi security forces abandoned oil hubs like Kirkuk in the face of a growing ISIS advance after the formal U.S. “withdrawal” in 2011. The occupation of Kirkuk seems to have emboldened Kurdish officials; as Reuters notes, Kurds say the oil nexus was “cleansed of Kurds and settled with Arabs under Saddam to secure control of the oil that was the source of Iraq’s wealth.”

“Everything that's happened recently shows that it's the right of Kurdistan to achieve independence,” Kurdistan President Massoud Barzani told the BBC in 2014, just as U.S. military personnel were gearing up to return to the country to battle ISIS. “From now on, we won't hide that that's our goal. Iraq is effectively partitioned now. Are we supposed to stay in this tragic situation the country's living? It's not me who will decide on independence. It's the people.”

A peshmerga soldier climbs through window during building assault training at Bnaslawa, Iraq on Feb. 2, 2017. This training is critical to enabling local security forces to counter ISIL as they continue to liberate their homeland. Combined Joint Task Force – Operation Inherent Resolve is the global Coalition to defeat ISIL in Iraq and Syria. (U.S. Army photo by Spc. Ian Ryan)

Was a military intervention unforeseeable?

Short answer: No. The Iraqi parliament announced on Sept. 12 that it considered an independence vote by the Kurds a “threat to … the civil peace and regional security” and had authorized al-Abadi “to take any measures necessary to preserve Iraq's existing borders,” according to Al Jazeera. On Sept. 18, Iraq’s Supreme Court declared the resolution illegal, irreconcilable with the country’s fragile constitution. On Oct. 1, Iraqi security forces conducted highly public military exercises with Iranian Artesh and Islamic Revolutionary Guard Corps units, an overt show of force designed to induce the Kurds to maybe forget the whole independence thing.

Finally, on Oct. 11, the KRG announced that it suspected Iraqi government forces and Iranian-backed Popular Mobilization Force (PMF)1 militias were “preparing a major attack” on Kirkuk and the northern city of Mosul, the latter of which served as the heart of ISIS’ “caliphate” until its liberation by U.S.-backed Iraqi forces this summer. After two days of vocally demanding that Kurdish peshmerga soldiers vacate Kirkuk, Iraqi forces made their move on Oct. 15, deploying troops in an armored convoy to occupy the city’s provincial government headquarters, Reuters reports. According to the Institute for the Study of War, the government coalition included ISF forces, the elite U.S.-trained Counterterrorism Services troops, and several Iranian-backed units PMF brigades.

Overwhelmed, the KRG ordered Kurdish forces to withdraw, accusing the Iraqi military of conducting a “major, multi-prong attack” as the latter secured Kirkuk’s valuable oil fields and transportation hubs. But on the western border of Kurdistan, Turkey too lies in wait: Turkish President Recep Tayyip Erdogan reportedly consulted with the Iranian government by phone regarding the Iraqi-Kurdish conflict, expressing worries that the vote “will bring chaos to the region” and initiating his own military exercises on the border, per Military.com.

Fighters from the Hashed al-Shaabi (Popular Mobilisation) paramilitaries ride atop an infantry-fighting vehicle while advancing towards villages between the northern Iraqi cities of Hawija and Kirkuk on October 6, 2017, after retaking Hawija from Islamic State (IS) group fighters a day before.

Why would the Iraqi government escalate things?

Security’s a must, certainly: An independence referendum in Kurdistan could potentially put security in the hands of Kurdish peshmerga, a transition that would threaten to undo efforts by Iraqi security forces to dislodge ISIS from the strategically important cities of Hawija and Tal Afar that lie between Kirkuk and Mosul. But given the peshmerga’s defense of Kirkuk after the ISF abandoned the city to ISIS in 2014, security capability seems like an unsatisfying explanation, especially given the uncomfortable dynamics between the peshmerga, the PMF paramilitary militia, and local tribal forces who generally hate each other without ISIS militants to draw their ire.

But like all things, oil’s the real goal here: Kirkuk Field can generate some 1 million barrels a day, a substantial source of oil revenue that could keep the Kurdistan provisional government funded and functional for decades. Prime Minister al-Abadi tipped his hand on Oct. 16 by advising local civil servants in Kirkuk to continue performing their duties and “fulfill our constitutional duty and extend the federal authority and impose security and protect the national wealth in this city.” Indeed, the steady decline of ISIS in Syria has led to a growing push among foreign-backed and government forces there to secure oil and gas fields on the eastern border with Iraq: If anything, the Iraqi government is simply planning for the next big fight after Operation Inherent Resolve comes to an end, and that fight will be for oil.

The conflict between the Iraqi government and the Kurds is uncomfortable for the United States in terms of both military strategy and broader geopolitics. The Kurdish army of between 80,000 and 240,000 peshmerga, though historically more capable than the brand-new Iraqi military the Department of Defense decided to rebuild after the 2003 invasion, have proven an essential component of Operation Inherent Resolve, especially during the long road to oust ISIS militants from their Iraqi stronghold of Mosul. And the United States certainly has skin in the game: During a Sept. 26 hearing before the Senate Armed Services Committee, Joint Chiefs Chairman Gen. Joseph Dunford worried that the Kurdish referendum might end up seeing peshmerga disappear from the front lines of OIR.

Both ISF and Kurdish forces risk giving ISIS breathing room to reassert itself in the region by fighting each other, and the Pentagon has attempted to downplay the rising tensions in Kirkuk. In an Oct. 16 statement, the Pentagon urged both the Iraqi government and KRG to “refrain from destabilizing actions, and instead focus on fighting” ISIS. And in a separate statement, OIR spokesman Col. Ryan Dillon attempted to characterize the ISF maneuvers in the region as “coordinated movements, not attacks,” calling the clashes between KRG and ISF forces “a misunderstanding” as the result “two elements to link up under limited visibility conditions.”

But the Iranian and Turkish military overtures capture a changing balance of power regarding U.S. military and political influence in the country. On Oct. 13, President Donald Trump “delivered a fire-breathing indictment” of the nuclear pact with Iran initiated by President Barack Obama in 2015, as the New York Times characterized it, disavowing the accord as nuclear appeasement but stopping short and completely withdrawing the U.S. government from it. The bluster followed months of Trump’s prolonged reaming of Secretary of State Rex Tillerson over the details of the nuclear deal, a dynamic that not only deepens the perception of chaos and instability in the U.S. executive branch, but continues to hobble and undercut diplomatic efforts from Iran to North Korea.

As a result, the U.S. government no longer appears to be top dog when it comes to the internal politics of Iraq. After pouring $60 billion into a largely failed nine-year reconstruction effort, the political environment in Iraq is such that Qassem Soleimani, a force commander from Iran’s Islamic Revolutionary Guards Corps, can roll up in Kurdistan and hand deliver “a direct ultimatum from Ayatollah Khamenei” to KRG officials, according to the Institute of War. Iran! America’s enemy! In Iraq! America’s client state and subject to an eight-year Iranian invasion. (What an age we live in!)

Should the clashes in Kirkuk escalate into an all-out, full-blown war between KRG peshmerga and Iraqi government forces, there’s no doubt that the region will likely devolve into the crowded, chaotic battlefield that currently defines war-torn Syria, a morass of overlapping foreign and domestic alliances that will threaten to plunge the Middle East into global war. And amid that chaos, ISIS, already on the verge of defeat in its last major stronghold of Syria, may find fertile soil to take root in Iraq once again — a vicious cycle that may only further entrench the U.S. military in a forever war with no end.