God help us all, the Marines have the JLTV

If it took American soldiers just four days to total one of their new tactical vehicles, God only knows how long it will take Marines 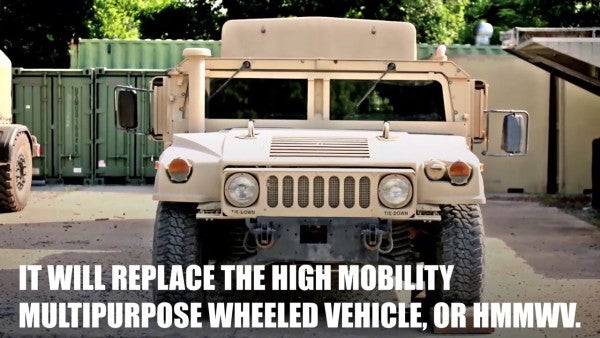 If it took American soldiers just four days to total one of their new tactical vehicles, God only knows how long it will take Marines.

The Marine Corps fielded the first of its new Joint Light Tactical Vehicles at the School of Infantry-West at Camp Pendleton on Thursday, officials announced on Facebook.

The service plans on fielding between 250 and 300 JLTVs across the Corps this year, officials told Military.com. Marines with the 3rd Battalion, 8th Marines, II Marine Expeditionary Force at Camp Lejeune are slated to get their new rides shortly after Memorial Day, followed by the I MEF and III MEF in September.

Their arrival may be a bit bittersweet: the latest assessment of JLTV the Pentagon's operational testing and evaluation arm released earlier this year stated that the vehicles, designed to replace the much-hated Humvee, “are not operationally suitable because of deficiencies in reliability, maintainability, training, manuals, crew situational awareness, and safety.”

Luckily for the Corps, soldiers from the 1st Armored Brigade Combat Team, 3rd Infantry Division at Fort Stewart who picked up their first JLTVs in January had a chance to work out some of the kinks, even if it involved flipping one of the Oshkosh-provided training vehicles during Operator New Equipment Training.

“What I believe is, once we start fielding and we are training the maintainers, training the operators and they are more comfortable with the vehicle, the reliability of the vehicle will go up,” Marine Corps JLTV program manager Andy Rodgers told Military.com, “which means there will be less maintenance on the vehicle.”

He's not wrong. After all, a vehicle isn't really warfighter tested until it's been Marine tested, right?

If you're a Marine who gets to rock one of these bad boys (or have footage of the aftermath), feel free to email me at jared taskandpurpose com. I'd love to hear about your attempted rendition of The Fast and the Furious.

WATCH NEXT: The First Ride Of The JLTV