On a Marine Corps base in Japan, the mold will continue until morale improves

“The mold has definitely been brought up but absolutely nothing has been done about it." 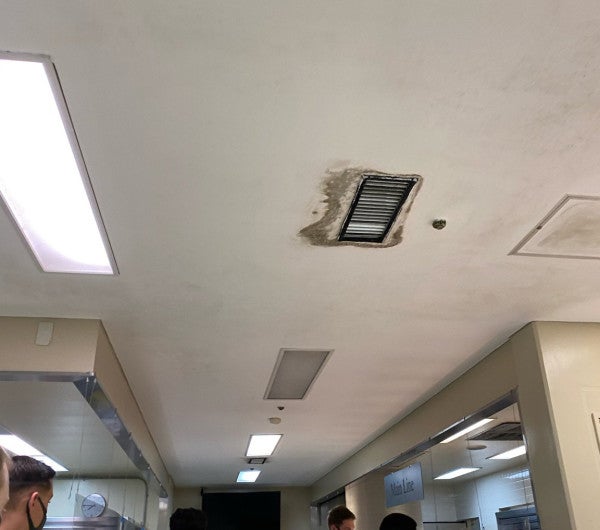 The mold will continue until morale improves.

At least that appears to be the unofficial mantra of Marines living at Camp Hansen in Okinawa, Japan, where some facilities appear to be wracked with mold, according to recent photos obtained by Task & Purpose.

In one four-story barracks used to house troops, building 2622, what appears to be mold has built up in and around the air vents, photos show. A similar buildup can be seen on the ceiling in the mess hall where Marines are served breakfast, lunch, and dinner, despite the facility undergoing a “year-long” revitalization effort finished less than two years ago.

“There isn’t a single Marine I know that doesn’t have mold in their rooms or rodent and bug issues,” one Marine source told Task & Purpose on condition of anonymity, referring to some of the approximately 1,200 sailors and Marines assigned to the 2nd Battalion, 4th Marine Regiment, an infantry unit from Camp Pendleton, Calif. currently deployed there as part of the 31st Marine Expeditionary Unit.

The issue is one that Marine officials in Okinawa say they are keenly aware of, since mold remains “a consistent issue,” said Lt. Timothy Hayes, a spokesman for Marine Corps Installations Pacific. Indeed, mold may be present in up to 50 percent of indoor environments in Japan, according to a World Health Organization estimate.

“Mold persists in this environment,” Hayes said of the subtropical island roughly a three-hour flight southwest of Tokyo.

Mold exposure can cause “a variety of health effects, or none at all,” according to the Centers for Disease Control and Prevention, which warns that “if you can see or smell mold, a health risk may be present.” A 2004 study found there was “sufficient evidence” linking the presence of indoor mold to coughing, wheezing, and upper respiratory symptoms in otherwise healthy people.

Hayes encouraged individuals to report mold issues so they can potentially be investigated by Navy medical professionals, but, he said, without knowing exactly where or when the photos were taken, officials “could not determine if this concern was reported … or what actions were taken.”

Hayes did not respond after Task & Purpose specified where the photos were taken (the first-floor hallway and fourth floor of building 2622, respectively) nor did he answer when asked how many times personnel from the naval hospital had conducted a mold-related survey in 2020.

“The mold has definitely been brought up but absolutely nothing has been done about it,” the Marine source said. “It’s not a priority for them.”

Health in the barracks is of particular concern for Marines and families across Okinawa, where a second wave of novel coronavirus (COVID-19) cases in July forced many into mandatory quarantine, including the Marines of 2/4.

That month, the rapid spread of the virus sent Marine officials scrambling amid negative attention over the outbreak in the Japanese press. Some feared Chinese efforts to drive a wedge between the U.S. military and island residents, since many Okinawans oppose further military expansion there, while others want the tens of thousands of American troops and civilian contractors to leave altogether.

On July 8th, the commander of Camp Hansen ordered the base closed “until further notice” to stop the spread of the virus. Days later, higher leadership at nearby Camp Courtney ordered troops arriving in Okinawa to be placed under mandatory quarantine for two weeks.

It remains unclear whether their mitigation efforts were a success: an unclassified Marine intelligence assessment obtained by Task & Purpose said there had been an “exponential increase in cases” since July 23, with the current spread “showing no signs of slowing down.”

According to the assessment, dated Aug. 4, there were at least 92 active COVID-19 cases on Okinawa among military personnel, family members, and civilians. At least 23 were Marines assigned to 2/4’s Echo and Fox companies, which likely spread between two separate barracks buildings through an “asymptomatic Marine or improper [restriction of movement] procedures,” the assessment concluded. It said there were more than 280 total cases since the July outbreak.

Analysts predicted the “most likely” scenario would be a 3 percent daily increase in total cases, potentially bringing that total to 412 by Aug. 18. A Marine official initially declined to provide the current number of active cases on Okinawa, citing a Pentagon order in March restricting the sharing of COVID-19 cases numbers for military bases due to “operational security concerns.” After the publication of this article, a second Marine official said current case numbers could not be provided but, as of Aug. 28, there were 108 active cases of COVID-19 among all U.S. forces in Japan.

Still, Marine sources said their leaders at Camp Hansen took the outbreak seriously, urging the wearing of face coverings while limiting the use of stores, gyms, and common areas on base. Officials with the 31st Marine Expeditionary Unit even mandated that their troops wear desert camouflage in an effort to make Marines stand out.

And that meant, at least for many, far more time than usual in the barracks — and with it, potential exposure to mold.

But mold doesn’t seem to be the only issue plaguing the barracks: the same building lacks working card readers for many of its doors, one Marine source said, forcing Marines to leave their doors open and risk theft of their personal items and issued gear. Capt. Brett Lazaroff, a spokesman for the 31st MEU, said he was unaware of specific reports of broken card readers, but added that “if a lock breaks, it needs to be reported to base operations, and they respond to fix or replace it.”

And while the barracks have security cameras installed, they are apparently not in use since they are “not funded” by the Marine Corps. “An outside contracted agency is responsible for the funding and maintenance of the security cameras,” Hayes said without offering specifics.

If security cameras were indeed cut from the budget, they wouldn't be the only funding casualty. According to Federal News Network, the Pentagon “knowingly scrimped on facility upkeep” for years in favor of using budget dollars for military readiness, which has elevated the risk that neglected facilities throughout the military would steadily decline and require costly emergency repairs.

“The results of not paying for sustainment in 2013 and 2014 means that we now have a $3 billion maintenance backlog and 5,500 major work orders,” an Army assistant secretary warned in 2015.

An incident from early August seemed to highlight this problem when a different barracks on Camp Hansen, building 2665, was turned into a temporary, yet far less enjoyable slip-and-slide after a water pipe in the ceiling of the building’s third floor ruptured unexpectedly, sources and Marine officials said.

When asked what happened, Lazaroff said that on Aug. 9 the pipe burst and flooded the floor of the “laundry room floor and adjacent hallways.” He added that base maintenance personnel responded and temporarily repaired the ruptured pipe that evening, though the flood of water “affected several rooms,” Lazaroff said, which got “some organizational gear on the ground wet but did not damage any property.”

By Monday, workers had made permanent repairs to the pipe, another Marine official said.

Yet videos and photos viewed by Task & Purpose suggest the flooding was far worse than officials described, showing Marines sweeping away water from their own hallways, which ultimately flowed down two flights of stairs. No other maintenance workers were called in to help remove the water, said Hayes.

“The leak affected a Heat Activation Device in the building which activated the Fire Alarm panel,” said Hayes, the Marine installation spokesman. “The Fire Department responded to the alarm, and maintenance crews were able to fix the device and reset the panel.”

Days after the flooding incident, the Marines and sailors of 2/4 were released from their restrictive quarantine. And a few days after that, they were embarked on Navy ships, headed into the Pacific. To the Philippines? The South China Sea? Hundreds of Marines may soon be stationed off those shores, seeing them for the first time.

But at least one noticed a familiar scene while riding a bus to the port. There on the seat ahead of them were brownish-black stains, as if someone had hurled paint on the back of the seat. “Even the buses they have us on to travel to our ships have mold in them,” the Marine source said.

Mold had welcomed the Marines to Okinawa. It would also wave them goodbye.