As snow blankets much of the Northeastern corridor, a young Marine snapped a photo of a Marine four-star general doing... 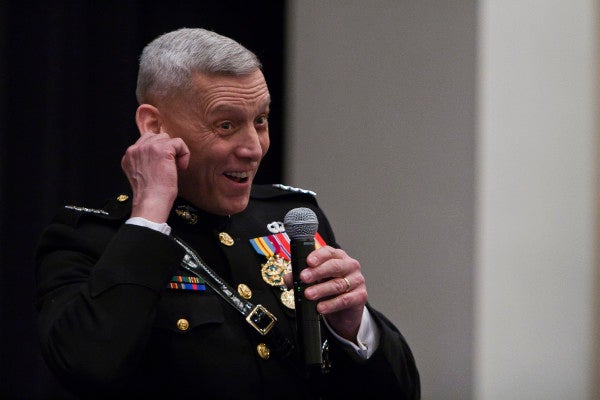 As snow blankets much of the Northeastern corridor, a young Marine snapped a photo of a Marine four-star general doing exactly what he should be doing – shoveling his own damn sidewalk.

The photo posted to Instagram shows the general, Gen. John Paxton, the assistant commandant of the Marine Corps, outside his home in D.C. on 8th Street, shoveling snow in jeans.

I love this photo. One of the biggest threats to our military is the god-complex held by senior leaders. It’s what leads commanders to have affairs, to have subordinates feed a friend's cat for you, or to go on wild adventures in Russia and consort with suspicious women.

It would have been so easy for Paxton to have a lance corporal shovel his driveway In fact, it likely happens every day with other generals.

When news broke in 2012 of Gen. David Petraeus' affair, the Washington Post ran a great piece on the luxurious lifestyle that four-star generals lead, which lends itself to bad behavior and losing sight of what's important.

The commanders who lead the nation’s military services and those who oversee troops around the world enjoy an array of perquisites befitting a billionaire, including executive jets, palatial homes, drivers, security guards and aides to carry their bags, press their uniforms and track their schedules in 10-minute increments. Their food is prepared by gourmet chefs. If they want music with their dinner parties, their staff can summon a string quartet or a choir.

It's nice to see one doing things the right way, especially when he thought no one was watching.