In bad news for forward-deployed Marines worried about their spouses running off with someone else, the Corps has unveiled its... 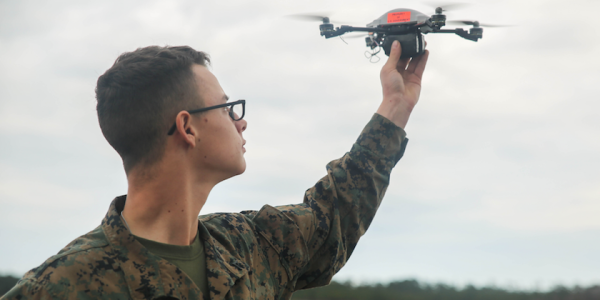 In bad news for forward-deployed Marines worried about their spouses running off with someone else, the Corps has unveiled its new unmanned aircraft system badges, so that when drone operators emerge from their secret underground lairs, people know who they are.

The Marine commandant, Gen. Robert Neller, authorized the badges for wear last November, part of what Military.com describes as a larger Pentagon effort to “emphasize the contributions of military drone operators as unmanned systems become an increasingly significant feature of warfighting.”

Available in two varieties — enlisted and officer — each badge features a pair of golden wings, as well as a downward-pointing “delta,” which probably stands for “drone.” Or maybe “Dew,” as Mountain Dew is the drone pilot’s beverage of choice.

The officer's badge is gold from tip-to-tip and boasts a pair of crossed anchors. The enlisted badge, however, is anchor-free and the delta is silver. There has been talk that the drone appurtenance looks like something out of Star Trek — but that, of course, is an absurd comparison, because Star Trek is for nerds.

The first winging ceremony is scheduled for May 18, according to Marine Corps Times.