Senate confirms Army Gen. Mark Milley as the next chairman of the Joint Chiefs of Staff

"My dad at the beaches of Iwo Jima went 19 consecutive days without eating in some of the most brutal combat in military history," Milley said in 2018. "Combat is not for the faint of heart. It's not for the weak-kneed." 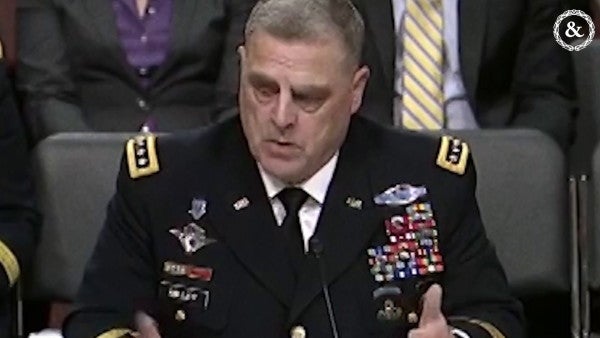 Army Gen. Mark Milley has been confirmed to become the next chairman of the Joint Chiefs of Staff.

“I am humbled and honored to be confirmed as the next Chairman of the Joint Chiefs of Staff,” Milley said Thursday in a statement. “Thank you to the president and the Senate for their confidence. I have been privileged to serve as Chief of Staff of the Army these last four years, and look forward to the opportunity to continue working alongside the soldiers, sailors, airmen, Marines, Department of Defense civilians, and families serving our nation's military.”

Dunford issued a statement on Thursday congratulating Milley on being confirmed by the Senate.

“General Milley and I have served together multiple times to include our time together in combat,” Dunford said. “He will be a superb chairman. The president, secretary of defense, and our men and women in uniform will be well served by his superb leadership, intellect, operational experience, and deep understanding of today's national security challenges. I thank him and his family for their continued service to our nation.”

Since becoming Army chief of staff in August 2015, Milley has focused on getting soldiers in shape for rigorous combat. During his tenure, the Army rolled out a new combat fitness test that is both gender- and age-neutral.

“This fitness test is hard and no one should be under any illusions about it,” Milley said in October 2018. “But where we really don't want to lose soldiers is on the battlefield. We don't want young men and women killed in action because they weren't fit.”

The Massachusetts native is no stranger to combat. He has deployed to Afghanistan three times and also served combat tours in Iraq, Somalia, Panama, and Colombia.

“Ground combat is unbelievable,” he said in 2018. “Go look at those kids, who are walking up and down the hills of Afghanistan. My dad at the beaches of Iwo Jima went 19 consecutive days without eating in some of the most brutal combat in military history. Combat is not for the faint of heart. It's not for the weak-kneed.”

One of Milley's toughest adversaries has been the military's antiquated procurement system as he shepherded efforts to replace the reviled M9 Beretta with a new sidearm for soldiers.

In 2016, he complained that it was expected to cost $17 million and take two years to test and evaluate a new pistol.

“You give me $17 million on a credit card, and I'll call Cabela's tonight, and I'll outfit every soldier, sailor, airman and Marine with a pistol for $17 million,” Army Times quotes him as saying. “And I'll get a discount on a bulk buy.”

UPDATE: This story was updated on July 25 with statements from Army Gen. Mark Milley and Marine Gen. Joseph Dunford.

SEE ALSO: The Army Is Testing A New Rifle With Better Range And Accuracy Than The M4

WATCH NEXT: How To Prepare For The Army Combat Fitness Test