Editor’s Note: This article by Richard Sisk originally appeared on Military.com, the premier source of information for the military and veteran community. President... 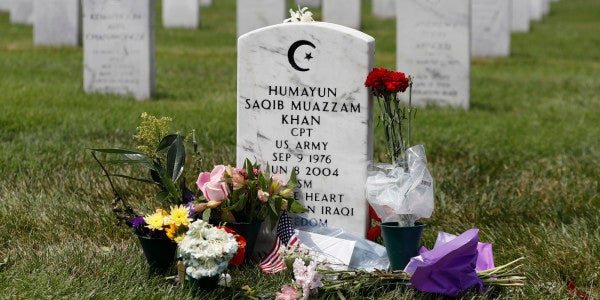 President Barack Obama and Sen. John McCain joined a growing bipartisan chorus Monday in calling on Donald Trump to end his feud with the Gold Star family of Muslim-American Army Capt. Humayun Khan, who received the Bronze Star and Purple Heart after his 2004 death in Iraq.

In an address to the Disabled American Veterans in Atlanta — his last as president before a veterans group — Obama never mentioned Trump's name but was met with applause when he referenced the case.

“No one — no one — has given more for our freedom and our security than our Gold Star families,” Obama said.

Those families who have lost a son or daughter “serve as a powerful reminder of the true strength of America,” Obama said. “We have to do everything we can for those families, and honor them, and be humbled by them.”

In a statement, McCain, an Arizona Republican and the chairman of the Senate Armed Services Committee, criticized Trump's remarks.

“In recent days, Donald Trump disparaged a fallen soldier's parents,” McCain said. “He has suggested that the likes of their son should not be allowed in the United States — to say nothing of entering its service.

“I cannot emphasize enough how deeply I disagree with Mr. Trump's statement,” McCain added. “I hope Americans understand that the remarks do not represent the views of our Republican Party, its officers, or candidates,” said the senator, a retiredNavy captain and Silver Star recipient for his heroism as a prisoner of war in Vietnam.

Brian Duffy, the new national commander of the non-partisan, 1.7 million-member Veterans of Foreign Wars, also said that Trump was “out of bounds” for continuing to question the motives of Capt. Khan's parents, Khizr and Ghazala Khan, who appeared on stage last week at the Democratic National Convention that nominated Hillary Clinton for president.

Trump appeared at the VFW's convention in North Carolina last week and later boasted of getting a warmer reception than Clinton, but Duffy said “the VFW will not tolerate anyone berating a Gold Star family member for exercising his or her right of speech or expression.”

In a statement, Duffy said, “There are certain sacrosanct subjects that no amount of wordsmithing can repair once crossed. Giving one's life to the nation is the greatest sacrifice, followed closely by all Gold Star families, who have a right to make their voices heard.”

Trump did not address the controversy during a campaign stop in Columbus, Ohio, on Monday afternoon, but he took to Twitter earlier to renew his criticism of Khizr and Ghazala Khan, who have singled out Trump's proposals to ban Muslims from entering the U.S. and questioned whether he ever read the Constitution.

Trump said Khizr Khan had “no right” to criticize him. He argued that the Khans should be focused on the “radical Islamic terrorism” that killed their son.

“Mr. Khan, who does not know me, viciously attacked me from the stage of the DNC and is now all over TV doing the same — Nice!” Trump said in his Tweet.

On CNN, Republican National Committee Chairman Reince Priebus, who has been trying to hold together a party increasingly divided by Trump's outbursts, said Trump had a right to defend himself.

Even so, he added, “I think this family should be off limits, and we love them and I can't imagine being the father of a little girl and boy going through the unbelievable grief of them not coming home one day in battle.”