A 1985 graduate of the United States Naval Academy, Gilday is a surface warfare officer who saw combat during the Persian Gulf War. 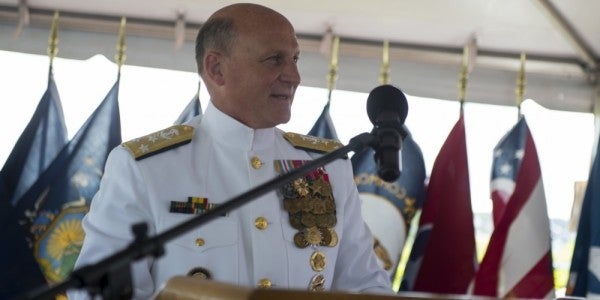 Vice Adm. Michael M. Gilday has officially been nominated to become the next chief of naval operations.

If confirmed by the Senate, Gilday would receive his fourth star and replace current Chief of Naval Operations Adm. John Richardson, who is retiring in September.

Gilday is the second flag officer picked to replace Richardson. In May, the Senate confirmed Adm. Bill Moran to lead the Navy, but Moran announced earlier this month that he would retire instead after acknowledging he had sought advice on public affairs matters from a public affairs officer who was investigated for allegedly sexually harassing women at a Christmas party.

Gilday has served as director of the Joint Staff since July 2018. At a recent press briefing, he made the Pentagon's case that Iran had launched a “campaign” against U.S. forces and allied nations in the Middle East, including the sabotage of foreign tankers and an attempted rocket attack on the U.S. Embassy in Baghdad.

“We believe with a high degree of confidence that this stems back to the leadership of Iran at the highest levels and that all of the attacks that I mentioned have been attributed to Iran through their proxies or their forces,” Gilday said during the May 24 briefing.

So far, U.S. officials have not provided reporters with evidence to back up their claims that Iran has directed incidents of sabotage and other attacks in the region.

A 1985 graduate of the United States Naval Academy, Gilday is a surface warfare officer who saw combat during the Persian Gulf War. In February 1991, he served as the combat systems officer aboard the cruiser USS Princeton when it struck a mine.

“The explosion sent shockwaves radiating along the ship's keel, throwing the aft lookout into the water and the forward lookout 10 feet into the air,” according to Naval History and Heritage Command. “Within several seconds, the shock waves triggered a second mine that exploded about 350 yards off the ship's starboard bow, the blast inflicting a side-to-side motion on the hull that nearly split Princeton in half and tossed men about for seven seconds.”

The ship's crew worked in filthy water to fight flooding and fires and bring the Princeton's radars and combat systems back online. Three of the injured sailors to be medically evacuated. The ship reached safety and was repaired in Bahrain.

WATCH NEXT: Chief of Naval Operations Statement on Recent Incidents in the Pacific