All of the military’s forks, knives and spoons will come from the last all-American flatware maker 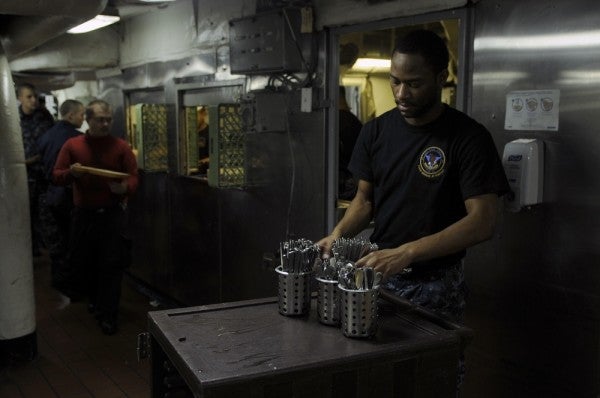 WASHINGTON – A $738 billion defense bill agreed to by House and Senate negotiators Monday night contains a provision that will boost a small Upstate New York company that serves as America's last flatware maker, according to Rep. Anthony Brindisi.

The National Defense Authorization Act for fiscal 2020 includes Brindisi's amendment requiring the military to buy American-made eating utensils for its installations around the world.

Sherrill Manufacturing in Oneida County is the only U.S. manufacturer that makes and sources 100 percent of its flatware domestically.

The company, which operates in the former Oneida Ltd. plant in Sherrill, sells its products to the public under the Liberty Tabletop brand.

“It's a huge deal,” Brindisi said in an interview Tuesday. “I'm glad we were able to get this win for a great company in Central New York.”

Greg Owens, CEO and co-founder of Sherrill Manufacturing, said the company has been selling about $1 million worth of flatware to the Defense Department each year. He said that sales will likely soar with the new requirement.

“We've clearly identified that we could double that number, and perhaps triple it,” Owens said Tuesday.

If the extra sales come through, Owens said, the company would likely hire five to 10 new employees to keep up with production. The company's existing workforce numbers about 56 employees.

U.S. Sen. Charles Schumer, D-N.Y., negotiated the amendment's inclusion in the final compromise bill after the Senate initially left the measure out of its version of the legislation.

The bill requires the Defense Department to buy flatware only from American manufacturers through fiscal 2023. The secretary of Defense would be required to “assess the rationale and implications of limiting procurement to domestic sources.”

The defense legislation also authorizes $44 million for a new drone hangar and railhead improvements at Fort Drum, and money to support a full squadron of 12 MQ-9 Reaper drones at the 174th Fighter Wing at Hancock Field north of Syracuse, according to Rep. John Katko's office.

The House-Senate compromise authorizes the purchase of an additional 12 F-35A fighter jets. Some of the radar systems for the jets are made at Lockheed Martin's plant at Electronics Park in Salina.