The Hero WWII Paratrooper Who Once Tricked 15,000 Germans Into Surrendering Has Died

Deployed to Europe with the 3rd Battalion, 504th Parachute Infantry Regiment, Burriss — who died on Friday, Jan.4, at age 99 — participated in some of the most dangerous and daring Allied missions of World War II 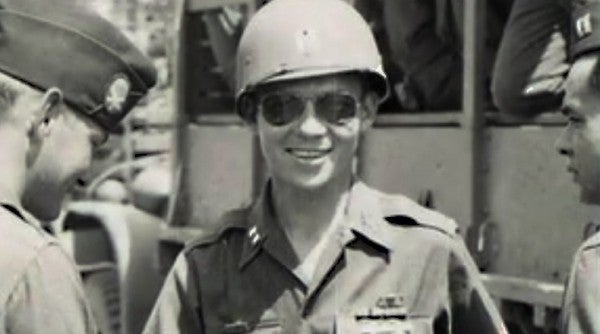 Few people outside of military and veterans circles will likely recognize the name T. Moffatt Burriss, but the Army veteran's stories of valor and heroism during World War II were the stuff every infantryman's dreams are made of.

Burriss, who died Friday at age 99, was deployed to Europe with the 3rd Battalion, 504th Parachute Infantry Regiment from May 1943 to September 1945, and participated in some of the most dangerous and daring Allied missions of the global conflict, including the Battle of Anzio, the Battle of the Bulge, and the Battle for Nijmegen.

Most notably, he fought in the Allies' critical push into Nazi-controlled territory in Operation Market Garden, his participation immortalized in a composite role by actor Robert Redford in the 1977 epic war drama A Bridge Too Far. His unit was so fearsome it became known as “Devils in Baggy Pants” by enemy Germans on the battlefield.

But while Burriss recounted his exploits in vivid detail in his gripping 2000 memoir Strike And Hold, one stands out: his singlehanded capture of an entire German Panzer division in April 1945. Here's how he recounted the incident in a June 2017 interview with Fox News:

The Allies were nearing victory in Berlin when, he recalled, orders came in from Gen. Dwight Eisenhower, who later became president, to stand down and allow Russians take control.

“But I said: 'I can't stand this any longer.' I got in my Jeep with the lieutenant and sergeant and said, 'Let's go across the river and see what we can see, see if there are some crowds still over there,'” he said. Burriss ended up stumbling head-on with a 15,000-man German Panzer Corps. That did not stop him from going straight to the German unit's leader. Burriss informed the three-star German general that he was there to accept the German unit's surrender.

The general, Burriss recalled, looked at him as if he was crazy – especially because he was accompanied by only two men and a Jeep.

“He went back and had a conference with his senior staff, walked back, pulled his pistol out and pointed it right at my heart. I will admit that I had a flutter inside my body at that moment, but he turned it around and had the pistol pointed toward himself,” Burriss said.

Here's to you, Burris: They don't make balls as big as yours anymore.