Meet The Navy Reservist Going The Distance At NASCAR In Daytona

The skills that Navy Reserve Lt. Jesse E. Iwuji learned during his time at the U.S. Naval Academy and on... 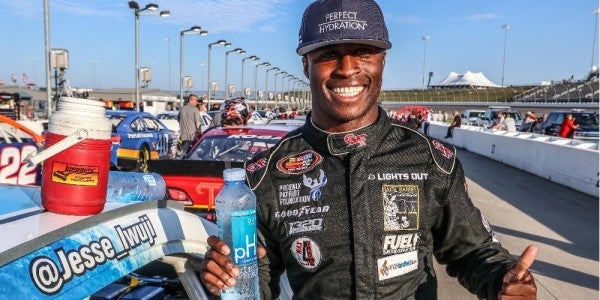 The skills that Navy Reserve Lt. Jesse E. Iwuji learned during his time at the U.S. Naval Academy and on active duty in became critical when he decided to pursue his true passion: becoming a professional NASCAR driver.

“When it comes to focus, teamwork, also just being able to make big decisions in high-stress environments, I think that’s where it really helps and comes to play,” Iwuji, a training officer at Naval Base Ventura County in California, told Task & Purpose. “When it comes to g-forces and aerodynamics and thermodynamics, you can actually apply a lot of [Naval Academy courses] to racing.”

Just like New England Patriots long snapper Joe Cardona, Iwuji has been allowed to reschedule his drill weekends so that he could race since he joined the Navy Reserve in June 2017. Most recently, he was able to postpone his drill weekend for February – which was later canceled due to the government shutdown – so that he could race Saturday at Daytona International Speedway and then Sunday at New Smyrna Speedway.

For Iwuji, racing is the culmination of a lifelong dream. While he has always loved cars and racing, Iwuji growing up without the money to pursue his passion for the sport. Instead, the native Texan embraced football — the state’s unofficial religion — and was recruited to play at the Naval Academy in 2004. Once he graduated in 2010, he devoted his energies to his next passion of motor sports

“I started drag racing at different drag strips with my Dodge Challenger,” said Iwuji, who currently lives in Ventura, California. “I had bought a Corvette and from there I took the Corvette to different road-course tracks and ran that for a little bit and learned how to go fast around corners. That’s what led me to wanting to pursue a professional driving career. NASCAR was the first door that opened up for me to pursue that.”

He began racing in 2015 when he was sent to the Naval Postgraduate School in Monterey, California, where he would work on weekdays, fly to the racetrack on Friday evenings, return on Sundays and be at work on Monday mornings. Since there is no formal training to become a NASCAR driver, Iwuji started out in lower level series of racing, but he quickly learned the finger points of race-craft.

Iwuji credits his commanders, both active-duty and reserve, for allowing him to take time when needed to race. “They were always really supportive of me just because they knew I was chasing my dream,” he said. “They knew what my end goal was and where I wanted to go.”

Although the Navy does not sponsor him, Iwuji said the publicity he gets from taking part in races benefits the service.

“Too many times, the only thing you hear about the military is suicides rates and veterans not being able to get this and that,” Iwuji said. “It seems like it’s a bunch of negative stuff, but this is actually something positive. It’s somebody who’s been in the military, who’s served, who’s been on deployments, who’s still in, and still going out and chasing their dreams.”