Inexpensive Russian and Chinese weapons, such as cyberwar and antiship missiles, threaten the West’s reliance on expensive arms such as... 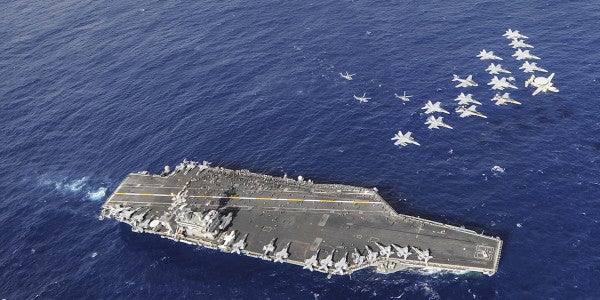 Inexpensive Russian and Chinese weapons, such as cyberwar and antiship missiles, threaten the West’s reliance on expensive arms such as aircraft carriers.

“China and Russia appear to have focused many (but not all) their efforts on being able to put at risk the key Western assets that are large, few in number and expensive,” reads a recent study by the Royal United Services Institute, a British military think tank.

“Western governments have become acutely aware of the problems of this financial imbalance in the counterinsurgency context, when they found themselves using weapons costing $70,000, sometimes fired from aircraft that cost $30,000 an hour to fly, to destroy a Toyota pick-up vehicle that might be optimistically valued at $10,000,” the report went on. “Missiles costing (much) less than half a million pounds [$642,000] a unit could at least disable a British aircraft carrier that costs more than £3 billion [$3.9 billion]. Indeed, a salvo of ten such missiles would cost less than $5 million.”

The British report is in response to America’s Third Offset Strategy, the Pentagon’s search for ways to maintain U.S. military superiority amid the rise of asymmetric warfare. The ability of a missile or a computer virus to destroy or disable expensive Cold War–era weapons like aircraft carriers or tanks, or the satellites and computer networks that support them, has left U.S. planners grappling with how to devise new capabilities while rendering older weapons less vulnerable.

But what makes the RUSI report particularly interesting is the nation that authored it. With one-twelfth the defense budget of the United States, Britain can’t afford to lavish money on numerous projects like their cousins across the pond do. So, by necessity, the British study offers a particularly clear-eyed view of the situation.

For example, RUSI points out that the current situation should come as no surprise. The United States fielded stealth aircraft and cruise missiles more than twenty-five years ago. “It would be naive to expect that Russia and China are not where leading NATO states were three decades ago.”

Nor can the West count on technological superiority. American and British armed forces are configured to fight overseas, in expeditionary forces or in support of or allies. In contrast, Russia and China have chosen to focus on fighting near their home borders, such as eastern Europe or the South China Sea. “Thus, although the US spends much more on defence technology development than its potential adversaries, its better technology does not necessarily translate to proportionate military advantage in a specific theatre,” RUSI notes.

However, the last option—what RUSI calls Terminate—is the most explosive. It essentially means getting rid of weapons that can no longer perform effectively in combat, yet can’t or are too expensive to upgrade. “The judgement here will be whether it is the most cost-effective means to deliver that effect, or whether a less sophisticated capability might be more appropriate,” RUSI says. “Second, while desirable, the capability could be rapidly reconstituted should the need arise.”

The RUSI report carefully refrains from naming specific weapons that might need to be eliminated. But given the study’s conclusion that Russian and Chinese weapons now threaten Western reliance on a small number of sophisticated and irreplaceable platforms, the large aircraft carriers beloved by the U.S. Navy would seem to be at the top of the list.

This option “is understandably the most difficult, requiring an alignment of stakeholder interests and decisive action,” RUSI admits. It’s also easier for Britain than the United States: the British are unlikely to confront an adversary such as Russia or China alone, without Western and especially U.S. forces that can provide capabilities that Britain can’t. It’s the Americans who need to be able to provide the muscle and the lift.

Nonetheless, perhaps it takes a former great power like Britain, fading gracefully from center stage in the global arena, to admit reality.