As a member of the elite Office of Strategic Services, Frank A. Gleason spent the final year of World War … Continued 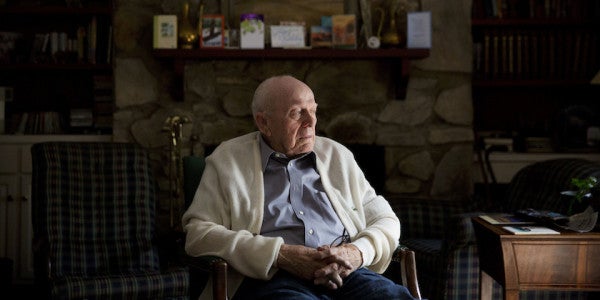 As a member of the elite Office of Strategic Services, Frank A. Gleason spent the final year of World War II leading a small team of operatives tasked with carrying out sabotage operations against Japanese troops in southern China. In a recent interview with the Associated Press, the legendary commando joked that his outfit would be regarded today as a “trained band of terrorists.”

Of course, given the decisive contributions Gleason and his fellow OSS operatives made to the Allied campaigns in both Europe and the Pacific, the more obvious descriptor would be “heroes.”

At 97, Gleason is now one of the few remaining veterans of the OSS, the World War II-era predecessor of the Central Intelligence Agency. He is also the latest recipient of the Congressional Gold Medal, the nation’s highest civilian honor, reserved for those who “performed an achievement that has an impact on American history and culture that is likely to be recognized as a major achievement in the recipient’s field long after the achievement.”

While efforts to formally honor the sacrifices of U.S. spies during World War II have faced roadblocks in Congress in previous years, House Speaker Paul Ryan formally presented the Congressional Gold Medal to the OSS on March 21, and Gleason’s arrived in the mail several weeks later. His fellow recipients include the likes of likes of George Washington, Buzz Aldrin, and Dr. Martin Luther King Jr.

“Who would ever dream that at 97 years old, I would get a Congressional Gold Medal,” Gleason told the Associated Press.

A native of Marietta, Georgia, Gleason was freshly armed with a chemical engineering degree from Penn State University when he was recruited into the OSS. It was a tight-knit, exclusive group: When the agency was founded, director Gen. William “Wild Bill” Donovan famously said, “We need Ph.Ds that can win a bar fight.” Even at its peak strength, the agency remained smaller than an Army division.

In the fall of 1944, Gleason and his team were deployed to southern China, where over the next year they “blew up more than 100 bridges, wrecked railed rail lines, destroyed communication systems, and caused general destruction for the Japanese Army,” according to the AP. Years later, their heroics were immortalized in the 1960 war film The Mountain Road, with actor Jimmy Stewart played a character based on Gleason.

After the war, Gleason began a decades-long career as an officer in the Army’s Corps of Engineers. He retired at the rank of colonel in 1971.

“I am extremely honored and never expected anything like this,” he told the Associated Press. “I would say it was the icing on the cake for my 30 years of military service in the United States Army.”