"There's a lot of humanity there that people forget ... and we're making an endeavor to ensure they don't." 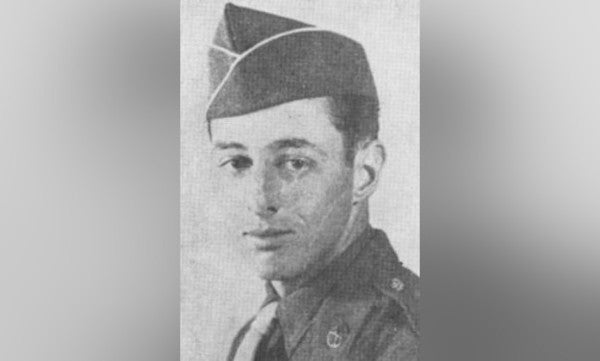 When the enemy attacked at dusk on Aug. 29, 1944, near Brest, France, a heavy-machine-gun unit for the Allies was out of position.

As Army infantrymen rushed to ready for battle, a 22-year-old Northeast Catholic High School alumnus stood up, in full view of Nazi paratroopers.

Buying time, Sgt. John J. McVeigh fired his M-1 rifle at the Germans, who were advancing on recently claimed Allied ground. When he ran out of bullets, McVeigh pulled out a trench knife and charged, killing one soldier in a hand-to-hand exchange before he was shot dead at point-blank range.

A U.S. Army tank destroyer M36 fires its 90 mm gun point-blank at a Nazi pillbox emplacement to clear a path through a side street in Brest, France, September 1944. (Library of Congress photo)

His sacrifice allowed members of the 23rd Infantry Regiment, Second Infantry Division, to mount a defense and hold their position. For his selfless efforts, McVeigh was posthumously awarded the Medal of Honor on April 20, 1945. He is believed to be the only Philadelphian to receive the military's highest honor during World War II.

“There's a lot of humanity there that people forget,” said John G. Kershaw, McVeigh's nephew and a retired Army aviator and foreign-area officer, “and we're making an endeavor to ensure they don't.”

This year, the Greater Philadelphia Chapter of the Association of the United States Army (AUS) is holding a series of events to commemorate the anniversary of the posthumous award 75 years ago. Events began Friday evening with the inaugural Liberty Stakes competition among Army ROTC teams from Temple, Drexel, and Widener Universities.

Each school broke its squad's into two groups, for a total of six squads competing for the first place trophy. Hosted by Drexel, the competition included a four-mile trek with weighted backpacks that culminated at the Art Museum steps, and a hand-grenade-assault course. There was also a tug-of-war, a casualty evacuation exercise, a rifle assembly and disassembly challenge, and a marksmanship exercise with a trivia portion pertaining to Philadelphia and the city's military history.

Earlier this year, the AUS brought McVeigh's story to ROTC leaders' attention, who were so inspired by his example that they opted to name the winner's trophy after the hero from Kensington.

“We just wanted to be a part of it,” said Lt. Col. James Hannigan, professor of military science for Task Force Dragon, the Army ROTC at Drexel. “We're grateful for this opportunity to honor Sgt. McVeigh and to share his story with our cadets.”

The trophy was unveiled at a ceremony Thursday morning at the Drexel Armory. Members of McVeigh's Gold Star family, including Joan McVeigh DeNofa, McVeigh's only child, addressed Drexel's squadron.

DeNofa, who lives in Torresdale and was 18 months old when her father died, told the students that she's been disappointed in what she has seen from younger generations, including widespread ignorance about history and a lack of respect for the ideals and freedoms that her father died fighting to protect.

“I didn't want to come here,” she said in an interview. Her initial feeling, she said, was: “My father didn't give his life for these bums.”

But, she added, seeing the students in uniform who were ready to serve their country and willing to look her in the eye made her feel differently.

Her father had worked at the Philadelphia Rust Proof Co. before being drafted. After the war, his young wife and only child were left without a steady source of income. They moved into Virginia McVeigh's mother's house in Northeast Philadelphia.

DeNofa said her mother wanted to hide all reminders of their loss.

“She was just so bitter,” DeNofa said. “When it happened, she shut herself down. She threw everything in a box, filled with his letters, photographs, and I didn't get it until she died.”

Seeing her father's name kept alive and attached to a group of young people who share his values makes her hopeful for the future, she said.

“He would have been so happy to see them,” DeNofa said.

McVeigh has been honored over the years by various organizations. In 1950, the city approved the renaming of McKinley Recreation Center — bordered by C, Ontario, D, and Westmoreland Streets in Kensington — to Sgt. John J. McVeigh Recreation Center. McVeigh, who graduated from the now-defunct Northeast Catholic High School in 1939, was inducted into its hall of fame in 1993. He is the school's only Medal of Honor recipient.

The new series of commemorative events is an attempt to reconnect a hero with his hometown and to reintroduce his story of self-sacrifice to a new generation of Philadelphians who aren't likely to otherwise recognize his name.

“I think sometimes people can get lost,” said Graylin Worcester, a veteran and president of the AUS Philadelphia chapter. “And Philadelphia is really great about taking someone who is brought back up and lifting them back up. It's really part of the fabric of the city.”