Russia Is Eyeing A Minigun Ammo Backpack Straight Out Of ‘Predator’

Images have been circulating on Twitter of a Russian Spetsnaz soldier apparently testing out a PKM heavy machine gun with... 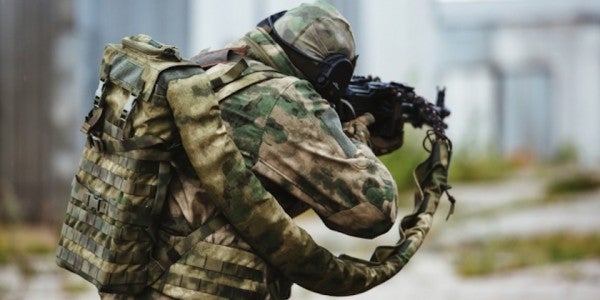 Images have been circulating on Twitter of a Russian Spetsnaz soldier apparently testing out a PKM heavy machine gun with an unusual ammunition-feeding backpack that bears an uncanny resemblance to Jesse Ventura's alien-perforating minigun from Predator. The backpack, known as the Scorpio, is a product of Front Tactical Systems — and according to The Firearm Blog, it was designed at the request of the Russian military as a method of increasing machine gun efficiency.

Eventually, Army Research and Development Command took on Winkowski's DIY system and fleshed it out from its humble roots as a ALICE pack modified with ammo cans and a MOLLE to the so-called 'IronMan' system (not to be confused with the much-hyped TALOS 'Iron Man' suit that U.S. Special Operations Command is looking to test by 2019). The system was under evaluation by the Army for over two years before they decided to purchase a small number; sadly, information has been scarce since 2014 (UPDATE BELOW).

Russian special operators must have been watching the U.S. Army tests from afar with jealousy, because the Scorpio is a much lighter-looking, more professionally-made version of the Army's IronMan. The sporty looking pack has a sweet looking belt system designed to not jam despite heavy movement.

Both systems are spiritually related to that devastating stripped-down mini-gun that Ventura hauled through an unnamed jungle in Predator. It is also worth noting that Arnold Schwarzenegger, though restricted to paltry carbines and sharpened sticks in Predator, rocked a similar system in Terminator 2: Judgement Day as an effective anti-aircraft weapon.

Prior to, and after the demise of the Army designed IronMan system, commercial versions to popped up to fill the needs of special operations forces and contractors. The U.S. version of the backpack-belt fed machine gun accessory has since evolved into several off the shelf options, most notably the Huron™ MICO – Machine Gunners Assault Pack, but it hasn't seen broad use in the U.S. military, likely due to the $4,000 price tag.

By contrast, you can buy a Russian Scorpio backpack today for 65,800 rubles, or roughly $1,000. Unfortunately, the MICO is a government only item, and the National Firearms Act could rain on your parade if you try to import a Scorpio stateside. One final problem could rain on your minigun parade; the system is designed to work with the PKM machine gun, which is a rather hard find in the American inventory — unless you are playing OpFor, that is.

After being contacted by a source close to the situation, it was alleged that the Russia did knock off the MICO pack made by Tyr Tactical. In an odd spy scenario, a MICO pack that was modified for use with PKM machine gun was used on the show 'Sons of Guns'. During this period a Russian national allegedly got a hold of one of the packs and copied it down to the seams.

Also as mentioned above, information on the Ironman system became scarce after 2014. According to the source of the above information, this system was both designed after the MICO, making it unneeded, and it was also a worse product, with the 700 plus that were purchased eventually being decommissioned.