Moscow will build 100 T-14 Armata main battle tanks by 2020 according to a senior Russian defense official, putting to... 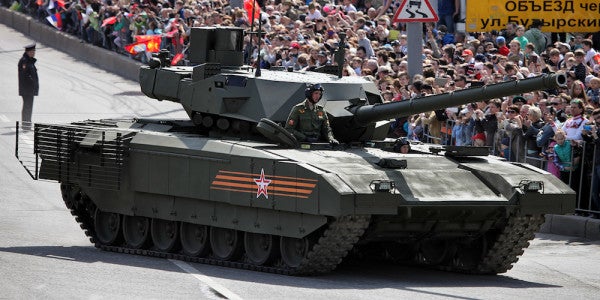 Moscow will build 100 T-14 Armata main battle tanks by 2020 according to a senior Russian defense official, putting to rest the fanciful notion that the Kremlin would build a fleet of 2,300 of fearsome new machines by that time.

“The designed models are currently undergoing operational testing,” Russian deputy defense minister Yury Borisov said at the Army-2017 tradeshow in Kubinka—outside Moscow—according to the TASS news agency. “We have a contract for 100 units that will be supplied before 2020.”

Most serious defense analysts who study the Russian military, including Michael Kofman at the Center for Naval Analyses, have long dismissed claims that Moscow would build 2,300 T-14 tanks by 2020 as ridiculous. Russian has neither the production capacity nor the financial wherewithal to build that many of the expensive new tanks that quickly. Even if the Russians build 120 tanks per year, it would take about two decades build that many machines.

The Armata Universal Combat Platform consists of the T-14 main battle tank, the T-15 heavy infantry fighting vehicle and the T-16 armored recovery vehicle, among a host of other vehicles. Another member of the Armata family might include an upgunned heavy assault armored vehicle. While the T-14 is no slouch in terms of firepower with its new 2A82-1M 125mm gun—which is mounted in an unmanned turret. This so-called “Tank Killer” variant seems to incorporate a derivative of the 2S35 Koalitsiya-SV’s 152mm artillery piece into the Armata chassis in a direct fire mounting. However, analysts doubt this variant will ever be built.

Meanwhile, footage from a Russian television segment on the T-14 main battle tank component of the Armata family shows an advanced armored three-man crew capsule fitted with touch screen displays. The interface looks simple and intuitive from what can be seen in the video. The Russians also seem to have developed a battle network connecting their T-14s and T-90MS tanks that can relay Instant Messaging, videos and imagery to multiple friendly tanks. The tank is also fitted with GLONASS and NAVSTAR GPS.

Perhaps the most impressive feature of the Armata series is the Afghanit active protection system (APS). The system uses a 360 active electronically scanned array radar and a potent electronic warfare system to disrupt the guidance of incoming rounds. It also has a countermeasure suite to jam enemy laser guidance systems.

As well, the tank is equipped with interceptor rounds for the APS, which are fitted with explosively formed penetrators. That means the Armata’s APS could potentially be effective against kinetic energy rounds. Most analysts do not believe that the system would be effective against those types of munitions, though it is possible it might be able to deflect a sabot. APS systems are usually most effective when used against chemical energy rounds like rocket-propelled grenades or missiles.

“Most revolutionary is the Armata-based T-14 Main Battle Tank featuring an uncrewed turret. There is emphasis on protection across the platforms—including active protection systems (APS)—reflecting lessons learnt as well as perceptions of future operating environments,” states the Military Balance 2016report by the International Institute for Strategic Studies. “When it enters service Armata will be the first tank designed for an unmanned turret and APS. Successful fielding of APS will reduce the effectiveness of anti-tank guided missiles and shoulder-fired weapons such as rocket propelled grenades. This will change battlefield dynamics by increasing the importance of cannon, anti-tank guns and tanks.”

But the best way to survive on the battlefield to not to be seen in the first place, as such, the Russians have taken steps to reduce the tanks radar and infrared signature so that it is more difficult to detect and track.

Should the Armata be found—and an incoming round makes it through the APS—the vehicle is protected by dual-layered Malachit explosive reactive armor in addition to robust passive armor. The composition of the armor is not known—but it is likely some form of laminated ceramic composite matrix. It’s also equipped with slat armor to protect certain areas that would otherwise be vulnerable to rocket propelled grenades.

The Armata is a source of major concern for Western armies. As a direct response to the development of the T-14, Germany has launched an effort to upgun the Leopard 2 with a new 130mm cannon and is developing plans to launch a new main battle tank called the Main Ground Combat System (MGCS).