The most challenging and tragic day of Army Staff Sgt. Ryan Pitts’ life began at 4:30 a.m. on July 13, … Continued 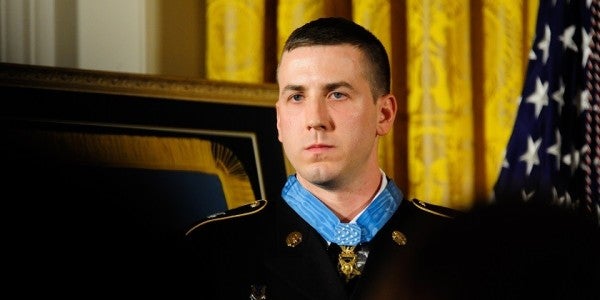 The most challenging and tragic day of Army Staff Sgt. Ryan Pitts’ life began at 4:30 a.m. on July 13, 2008, with a round of explosions that left him seriously wounded and with no hope of a medical evacuation. Nearly losing his life, he emerged with unparalleled lessons and experience, which he shared in a May 16 commencement speech at his alma mater, the University of New Hampshire.

Five days before the infamous battle, Pitts’ unit, the 173rd Airborne Brigade Combat Team, arrived at the remote village of Wanat in northeastern Afghanistan to establish a new vehicle patrol base. A forward observer, Pitts, and eight other soldiers were manning an adjacent observation post when the full-scale attack began, pitting 200 enemy fighters against just 48 American soldiers, according to the Army’s detailed account of the battle.

Severely wounded, Pitts thought he was out of the fight the moment the battle began. Extensive shrapnel wounds had rendered him unable to walk, with limited dexterity in his left hand.

But then Pitts took a look around at his brothers in arms relentlessly defending the observation post. “All my brothers were continuing to do their duty in the most hellish conditions I have ever seen,” Pitts told his audience of nearly 2,500 UNH undergraduate and graduate students, including 44 military veterans. “We counted on each other, and their dedication compelled me to do my part. They would never let me down, and I owed them the same.”

With a tourniquet on his leg, Pitts crawled back to his position and propped himself up to rejoin the fight. Eventually, Pitts discovered he was the last soldier left alive at the observation post. Two soldiers who arrived to reinforce the position were killed, along with all other defenders except for three of Pitts’ comrades — one who maneuvered to the patrol base for more ammunition and two who went to a casualty collection point after their calls for survivors went unanswered.

Alone, Pitts kept fighting off the enemy to prevent the capture of his post. Eventually four Americans from the patrol base volunteered to run through fire to rescue Pitts. In the process, they were all wounded, one mortally.

A 2013 UNH graduate currently working as a business development representative with Oracle, Pitts shared the important lessons he learned that are applicable to both soldiers and civilians.

Pitts admitted that he never imagined he had the ability to fight off a vicious attack for 90 minutes while he was wounded and, eventually, all alone.

“The task seemed insurmountable, but that experience took me to the edge of what I believed I was capable of,” Pitts told his audience. “I discovered that when we venture beyond the horizon of our perceived capabilities and do more than we thought possible, we unknowingly achieve this discovery every time we accomplish a challenge that appears to exceed our abilities. You must pay attention and appreciate these sometimes seemingly insignificant accomplishments. Treasure the fact that you have just exceeded your horizon, search for the next one, and never back down.”

2. Treasure the people closest to you, and put them before yourself.

Pitts told the audience that he is still constantly amazed at the selflessness of his brothers who patched his wounds and kept fighting relentlessly around him until their deaths. He realized that his fellow soldiers, with various beliefs, origins, and backgrounds, were all Americans who recognized together they were much stronger than the sum of their parts. “When we focus on shared purpose, respect our differences, and put others before self, nothing is impossible,” Pitts said.

Elaborating on this point, Pitts confessed that the country he volunteered to defend never actually crossed his mind during a firefight in Afghanistan. “Love for our country was one of the reasons that led us to join the military, but I can honestly say that our country never once entered my mind during battle. Many of my friends shared the same sentiment with me. We love America and that love was the purpose of our commitment, but it was the men to our left and right that mattered when the rubber hit the road. Altruistic dedication to others will be reciprocated by those worthy of our dedication. People and the relationships we have with them are our greatest treasure.”

Pitts acknowledged that both fear and courage were present among the soldiers during the 2008 Battle of Wanat. Their courage was driven by how they responded to fear.

“Courage cannot exist without fear and fear is everywhere in life,” Pitts said. “Fear of failure, loss, rejection. The key is to deny fear its purpose, which is to hold us back. If the men I served with were afraid that day, I never saw it. They showed me the true definition of courage. Courage is not the absence of fear, it is the ability to move forward in the face of it. There is beauty in this definition because courage can exist in the decisions we make every day. Courage exists in the individual who accepts who they are and openly lives the life they want in the face of rejection, courage exists in those who challenge their own perceptions in the face of accepting they are not infallible. Be courageous and appreciate courage in others who take action in the face of fear.”