Several people have already pointed out that it would be an injustice for the Senate to pass a National Defense... 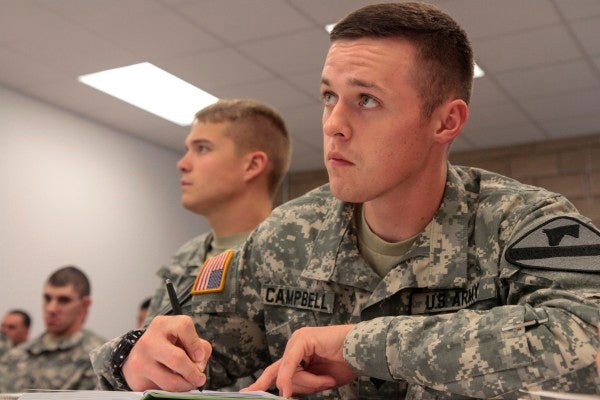 Several people have already pointed out that it would be an injustice for the Senate to pass a National Defense Authorization Act cutting dual-military married couples’ basic allowance for housing. On closer examination, it’s even worse than it sounds. Its second- and third-order effects demonstrate how difficult it is to tinker with entitlements, and serves as an object lesson in how not to do it. It reaps moderate financial gains by placing a significant pay cut onto a very small segment of military families, concentrating on the ranks that make the least money. It also has a disproportionate effect on women and creates an environment so hostile to military couples that it would almost certainly debilitate diversity and retention efforts.

The economic effect of this policy is relatively modest in terms of the overall defense budget. Only 87,000 out of 1.3 million active-duty military members (just 6.4%) are in dual-military marriages, according to the 2013 demographic report released by the office of the deputy assistant secretary of defense for military community and family policy. By using the most up-to-date housing allowance rates and data from the 2013 demographic report, I calculated the weighted national average across all locations and pay grades to estimate the annual savings that this proposed change would generate. This roughly translates to an absolute savings of $550 million per year, though it would be significantly lower when reduced by military couples assigned to different places. While that could save the A-10 for a year, it’s nevertheless a relatively modest portion of the more than $20 billion spent annually on housing allowances and $135 billion in total personnel costs in the $612 billion defense budget. And, since the policy would only go into effect on the couples’ next move, it would take as long as four years to realize those savings. Moreover, those savings would decline over time as people left the military, turned down joint-spouse assignments, and deferred marriage in response to their newfound second-class citizenship.

This is a bizarre policy decision from a committee that seems otherwise concerned with cushioning the blow of broader housing allowance cuts. To ensure a smooth transition to the goal of having members pay 5% of their housings costs out of pocket, the cuts are set at 1% and stretched across five years. This was implemented to smooth the transition and ease the strain of an entitlement cut, which will eventually save approximately $1 billion. Though both that cut and the cut to dual-military allowances would end up eliminating the same total amount each year over the next several, the cut to dual-military families would have a devastating and disproportionate effect. Affected junior-enlisted members in the highest-cost areas could see a more than 50% reduction in base pay and basic allowances for subsistence and housing, and dual-military families in general could see an average cut of around 27%.

That’s a staggering financial blow for any member, but these cuts hit exactly the wrong people. Nearly 67% of dual-military married couples are in the grades of E1 through E6, which means that $368 million of the estimated total savings would come from the enlisted the ranks of E1 to E6. All issues of fairness and equality aside, it should be very difficult for any politician or policymaker to argue that junior-enlisted personnel make too much money under any circumstances. And the effects of this policy are actually amplified at lower ranks due to their lower relative compensation.

Though this is not strictly speaking a gender issue, this policy hurts women at a disproportionate rate. More than 20% of all active-duty servicewomen are in dual-military marriages, meaning that one in five active-duty women and nearly half of all married active-duty women would be affected. The military has been one of the few places where women are guaranteed to get the same pay for the same work. But because this cut so disproportionately strikes at women, it creates a situation where an average active-duty woman’s base pay and basic allowances would end up being an estimated 96.3% of an average man’s. Instant pay gap. It is difficult to imagine another policy that would have such a disastrous effect on women’s standing and retention.

It’s hard to know precisely what motivated this policy, since nobody from the Senate Armed Services Committee has publicly defended it. One suggested reason is that some lawmakers felt that housing allowances should be more directly tied to housing costs. But that rationale is challenged by the odd inclusion of the roommate “tax” for unmarried members living together, which treats married couples differently from those just sharing a domicile. Why shouldn’t the government treat military roommates the same as married military couples and tax them their full basic allowance? Conversely, why not dock the married couple 25%? What about non-military roommates? Without an explanation from the committee, the motive behind the proposed cut remains a mystery.

Besides, the military already has a well-established precedent to link housing allowances to expenditures. Members stationed overseas can receive an overseas housing allowance if they live off base, which caps compensation to the actual costs — a program that pays 55,000 members $2 billion annually. Clawing back unused housing allowance would firmly tie housing benefits to costs — it just wouldn’t save any money. People who can spend a certain amount on housing but lose the difference will tend to find houses right at the cut-off point. In economics, this is known as a perverse incentive; it drives people to do inefficient or counterproductive things they otherwise wouldn’t.

So the argument for tying housing allowance to costs looks more like a smokescreen. Housing and subsistence allowances have been on the chopping block for years now, with at least one proposal to replace them both with a “locality allowance.” The complexity and politics of entitlement cuts often discourage any really serious consideration, but there are lots of potential ways to cut housing costs. For instance, eliminating the “with dependents” pay bump would treat all members equally, regardless of marital status. It would also save five times as much, around $2.5 billion per year, which would work out to an approximately 25% cut in house allowances for affected members and would be spread out more evenly on the 52% of the military that is married. More to the point, if the government actually thought that some troops are living too well, it could do actual means testing to cut housing from all families making more than a particular amount.

But no lawmaker would want to be associated with policies that so openly attacking military families. This leaves the impression that some lawmakers think there is something special about dual-military couples that makes them different from “normal” couples. This sly but vicious trope of dual-military marriages as “double-dippers” entrenches a status-quo attitude about what constitutes a proper family for military members, reinforcing the wholesome image of a single breadwinner whose spouse’s role is to support that member’s career and take care of the family. It construes dual-military families as selfish for taking two of something, rather than as being financially smart. It also ignores the fact that life in a dual-military marriage often entails costs and risks that members with civilian spouses don’t generally have to deal with, like paying for child care during training and exercises or placing children with relatives during dual deployments.

Ultimately, such a policy would be disastrous for dual-military couples. It creates weird incentives — like discouraging marriage and military roommates — and falls disproportionately on enlisted personnel and women. It makes a mockery of all manner of diversity initiatives, and would almost certainly lead to an exodus of women from the services. Nothing about it makes sense from an economic or human perspective. With any luck, the Senate will realize how badly they have fouled on this and will either eliminate it through amendment or allow the House-passed version to stand.