Editor’s Note: The story by Jake Allen originally appeared in the The Gazette (Colorado Springs, Colo.) (Tribune News Service). One... 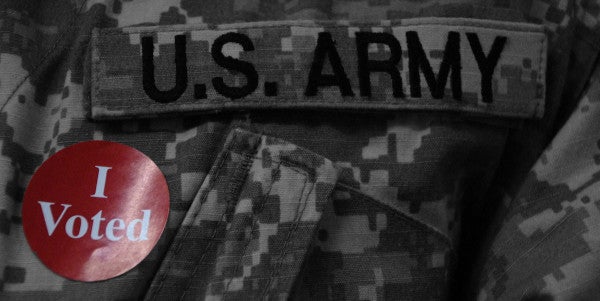 One of the most sacred values the military protects is the right to vote, retired Air Force Col. Mike Turner says, so he is working to ensure the men and women of the military are practicing this right.

He is the executive director of the nonpartisan Military Officers Association of America's Military Family Initiative. The group recently received a grant to fund a military voter education program.

“There is nothing that affects a military family's quality of life more than the quality of people they elect to office,” Turner said. “Your vote is just the single most important manifestation of your democratic rights as a citizen of this democracy.”

The Military Family Initiative received $218,300 from the Democracy Fund for the military voter education program.

“Whether active duty or retired, El Paso County is home to a huge military population, and we really feel it's important for those men and women that are serving overseas in combat zones and other areas to have the opportunity to select the leaders that will, in turn, decide whether or not they go to combat,” Parsell said.

“We do a lot of outreach to those people that would fall in that category, but, having said that, I don't think there is any harm in another group wanting to build upon those efforts to make sure those people have an opportunity to vote,” Parsell said.

The plan is to reach out to as many military families as possible and provide information on the upcoming elections and the absentee voting process, Turner said. The campaign officially kicks off Sept. 1 and will last a year. A lot of the focus will be on November's general election, Turner said.

Information will be distributed in the Military Officers Association of America magazine, through military officials in Washington, D.C., through a team that travels across the country to about 250 military installations each year, through a military blog for currently serving spouses and the group's LinkedIn account, which has about 27,000 subscribers.

Turner said the men and women of the military run into several problems when trying to vote in elections, the first being a communication barrier for those overseas.

“It's so difficult for someone stationed in Iraq to understand the issues and people involved in their county board election, so the simple communication challenges of the deployed force are huge,” Turner said.

The other problem many military personnel run into is confusion with how and where to request an absentee ballot. Turner said differences in policy regarding absentee ballots vary greatly state to state, and on top of deployment or moving across the country every so often, voting can get lost.

“It was a struggle for me to vote when I was serving,” Turner said. “It is easy when you are currently serving to get all wrapped up in the job and forget your responsibility to vote.”

When Turner was deployed with the Air Force, he said, he always voted but ran into the problem of not knowing if his ballots counted or not because he turned them in so close to election day.

The grant will help keep a commitment to military families, Turner said.

“We have a commitment to military families worldwide to express to them, retrospectively from our military careers, why it's so important for them to vote and participate,” Turner said. “It's why they wear the uniform – for the right to vote.”