The two Navy aviators responsible for scrawling a massive sky penis above Okanogan County, Washington, on Nov. 16 have officially... 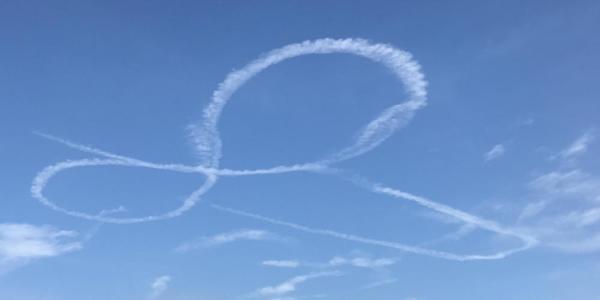 The two Navy aviators responsible for scrawling a massive sky penis above Okanogan County, Washington, on Nov. 16 have officially been punished by naval aviation chief Vice Adm. Mike Shoemaker, according to documents obtained by the San Diego Union-Tribune. And it appears they were spared a career-ending administrative punishment and instead instructed to educate their fellow aviators on the “ramifications and embarrassment” that result from scrawling massive penises in the skies despite the Navy’s long-standing embrace of cocky humor.

The pilot and backseat aviator of the EA-18G Growler, assigned to the Electronic Attack Squadron 130 “Zappers” out of Naval Air Station Whidbey Island, were reportedly “forthright and remorseful” during a Nov. 22 hearing before Shoemaker and the Field Naval Aviator Evaluation Board regarding the sky penis incident. Although the review board could have easily ended the drivers’ flying careers, the officials reportedly ended up placing the aviators on a six-month probationary period, with a few conditions that amount to writing “I will not draw dicks in the sky” on a classroom chalkboard.

A career aviator, Shoemaker ordered them to address their fellow crews on Whidbey Island in a series of “Change the Culture” briefs describing the “ramifications and the embarrassment it caused” while “contrasting their actions with the excellence and discipline” of other sailors worldwide. He also wanted them to explore the potential “strategic effects” their conduct might have.

The pilot, who has pending instructor orders to the training squadron at Naval Air Station Meridian in Mississippi, will conduct a similar presentation to both fellow instructors and students.

“When they came down, the aviators were apologetic,” Navy spokesman Cmdr. Ron Flanders told the Union-Tribune. “The aviators admitted that they had done it after it occurred. When they appeared before the [Field Naval Aviator Evaluation Board] they were contrite. They realized that this was an embarrassment to naval aviation and the entire Navy.”

The ordeal of these two cocksure aviators is far from over: The two are reportedly facing a JAGMAN (lol) investigation under Carrier Air Wing 3 at Naval Air Station Oceana, Virginia — an administrative inquiry designed to “help improve a command’s leadership, promulgate lessons for the rest of the fleet to avoid similar incidents and aid superiors making determinations about the future flight status of an aviator,” per the San Diego Union-Tribune.

The last dong-related incident to warrant a formal investigation by the Navy involved a group of Blue Angels who painted a “large blue and gold penis” that “was visible from satellite imagery (e.g. Google Maps)… through the end of the 2012 airshow season” on the roof of a trailer at the group’s winter training facilities in El Centro, California, according to a 2014 report on the incident.

Related: A (Very) Short History Of Military Personnel Drawing Dicks In The Sky »

Sure, a “stand and deliver” on the ethical troubles of drawing a sky penis may help stamp out the vile culture of rampant dick-drawing that’s undermining the armed forces. But here at Task & Purpose, we can read between the lines: The Blue Angels commander fired as a result of the 2012 incident was Capt. Gregory “Stiffy” McWherter, per the San Diego Union-Tribune; according to a Dec. 6 Navy press release, Zappers Cmdr. Eric “Skid” Sinibaldi was relieved by Cmdr. Brenden “Tess” Stickles — a call sign the Navy scrubbed from its digital press release in the last week.

The Navy’s had problems with crude callsigns for years: In 2010, a (now deleted) Navy Times article detailed a workplace harassment complaint filed by Ensign Steve Crowston over the uber-macho and often homophobic callsigns used by naval aviators — a trend that the branch had embraced:

Lt. Cmdr. Timothy Myers, assigned to Strike Fighter Squadron 31, gives a thumbs up after making an arrested landing in his F/A-18E Super Hornet aboard the aircraft carrier USS George H.W. Bush. George H.W. Bush is underway in the Atlantic Ocean.Photo via DoD

If the Navy wants to shame these aviators from drawing dicks in the sky as “contrary to the core values of the Navy,” as Flanders put it, then maybe it should reconsider gifting its jet jockeys with phallic call signs? Just a thought.