A new Army physical fitness test designed to measure combat readiness has entered final stages of development and could be... 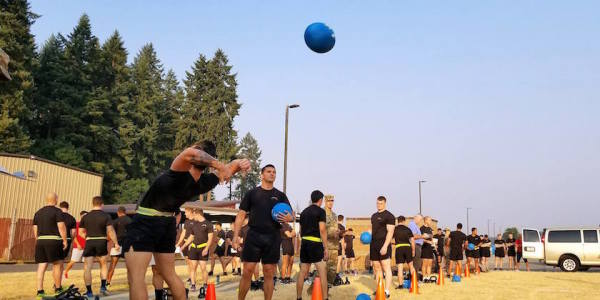 A new Army physical fitness test designed to measure combat readiness has entered final stages of development and could be fully implemented across the service as soon as next summer, Army Times reports.

The so-called Army Combat Readiness Test, or ACRT, is the culmination of more than a decade of research focused on developing a replacement for the Army Physical Fitness Test (APFT), which Army officials believe does not adequately measure how well a soldier will perform on the battlefield.

Developed by the Army’s Center For Initial Military Training (CIMT), the ACRT involves a total of six events versus the APFT’s three — a two-mile run, push-ups, and sit-ups — and, according to Army officials, better prepares soldiers for the physical stress of actual combat, while also reducing the risk of musculoskeletal injury.

“This has been in the works since the early 2000s,” Whitfield East, research physiologist with CIMT, told Army Times. “Soon after we went to war, it was pretty self-evident that the APFT did not sufficiently identify the high physical demand capacities that soldiers needed to execute warrior task and battle drills and common soldier tasks.”

A pilot version of the ACRT was rolled out in early August at Joint Base Lewis-McChord, Washington, where it was tested by a group of National Guard soldiers and members of the 2nd Battalion, 75th Ranger Regiment.

At least one Ranger, Staff Sgt. Talen Peterson, gave the test a favorable review, telling Army Times that it “is as close physically as you can get to replicate the types of physical actions you’ll do on the battlefield.”

Like the APFT, the ACRT measures muscular and cardiovascular endurance; however, while the APFT is purely calisthenic, the ACRT incorporates exercise equipment to measure what an Army official described to Army Times as three additional “domains of physical readiness”: muscular strength, explosive strength and agility.

“When the [APFT] was developed, they were still under the guidance of zero equipment,” East told Army Times. “What we know is that we can’t assess muscular strength with no equipment. You have to pick something up and put it down.”

The six events, which Army Times describes in detail here, are: A two-mile run, a 250-meter sprint/drag/carry, a maximum weight deadlift, the leg tuck, a standing power throw, and the t-pushup. The events were selected from a pool of around 30 initial options that the Army tested at Fort Riley, Kansas, in 2014.

The pilot phase of the ACRT now underway in Washington will put up to 2,000 soldiers through the test before the penultimate stage of implementation commences. According to CIMT’s research and analysis directorate, Michael McGurk, this stage will entail “an initial fielding of the test where we put it out for a trial period somewhere between six and 12 months.”

How the test will be scored and how often it will be administered have yet to be determined, but Lt. Col. David Feltwell, the principal doctrine developer for the Army’s physical readiness program, told Army Times that soldiers “will have to pass ACRT from reception battalion all the way through to separation” from the Army.

As with the APFT, the ACRT will be a “test of record,” meaning it will affect eligibility for promotion. Once the trial period is complete and final approval from senior Army leaders is granted, soldiers can start taking the ACRT for real. Army officials believe that could happen as soon as next summer.